Weko found traders were manipulating currency prices for their own gain 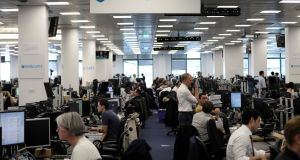 Four British and US banks will be fined about 90 million Swiss francs (€80m) this week by Switzerland’s competition authority for colluding to rig foreign exchange markets, weeks after the European Union handed out €1 billion of penalties for similar misconduct.

Weko, as the Swiss regulator is known, found that traders at Barclays, JPMorgan, Citigroup and Royal Bank of Scotland worked together in a cartel-style arrangement to manipulate currency prices for their own gain, according to people briefed on the decision.

UBS escaped a fine because it blew the whistle on the other banks in the group, while Credit Suisse is fighting the allegations and refused to settle, the people said. The two Swiss banks also declined to comment on the probe. – Copyright The Financial Times Limited