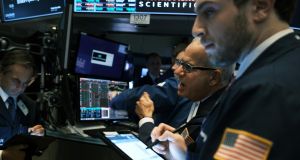 Stocks rallied on Wednesday as investors remained optimistic about a resolution to the prolonged US-China trade war. Photograph: Spencer Platt/Getty

Global shares were boosted on Wednesday after US president Donald Trump said Washington and Beijing were close to a “phase one” trade deal.

Irish stocks advanced 0.39 per cent on Monday despite little in the way of domestic, stock-specific news.

Irish Ferries-owner Irish Continental Group (ICG), however, was among the news-driven movers on Wednesday. The stock rose 0.88 per cent to €4.56 after the company announced revenue had risen 8.2 per cent to €308.8 million in the first 10 months of the year.

Financials Bank of Ireland and AIB were strong gainers on the day. Bank of Ireland advanced 2.46 per cent to €4.67 as customers complained over payments not arriving in their accounts. The bank had resolved the issue by the afternoon. AIB, meanwhile, rose 2.38 per cent to reach €3.01.

There were few losers on the day, with most trading positively or flat. But Dalata was leading the laggards, down 1.05 per cent to €5.65. Hibernia Reit was the biggest gainer on the smaller Iseq 20 index, advancing 3.16 per cent to €1.44.

The main Ftse index added 0.4 per cent on its fourth straight day in positive territory, as Asia-focused HSBC and miners gained on the prospect of an initial US-China trade accord.

British American Tobacco was the biggest boost among blue-chips, rising 3.1 per cent after it forecast annual revenue to grow in the upper half of its long-term target range.

The Ftse 250 index of midcap companies also rose 0.4 per cent, closing at its highest since July 2018, as hopes of an end to the Brexit saga through an election attracted traders to the domestic stocks.

An 8 per cent fall in publisher Future Plc weighed on the midcaps following a discounted share placement. Its shares marked their worst one-day performance since mid-June.

Among smaller stocks, holiday package provider On the Beach, which has said it would gain market share in the wake of Thomas Cook’s collapse, climbed 3 per cent higher after reporting a rise in adjusted profits.

A standout loser across the board was FastJet, which plunged 32 per cent to a new record low after it said it wanted to sell its Zimbabwean operations and raise capital, which could help the low-cost carrier make it until 2021.

Deutsche Telekom gained 1.3 per cent after a report that the company was examining a possible merger with France’s Orange. Orange shares were little changed as it said “there are no ideas or discussions going on”.

The pan-European Stoxx 600 index finished 0.3 per cent higher as comments from US president Donald Trump on Tuesday that Washington was in the “final throes” of work on a deal continued to buoy sentiment.

Sweden’s SEB gained more than 3 per cent as it said it saw no need for further action after a television report said accounts at the bank had links to suspected money laundering in Estonia.

Engineering group Andritz suffered its sharpest decline in nearly seven months after the Austrian company forecast next year’s profit to be similar to 2019, despite expecting a significant increase in sales.

The Dow Jones was weighed down by Boeing as the plane maker’s shares slipped 0.83 per cent after the Federal Aviation Administration said it would be the only issuer of airworthiness certificates for new 737 Max planes, potentially affecting the timeline of starting deliveries by December.

Boeing was also hit by a report that its 777X’s fuselage ruptured during a September stress test.

Deere & Co dropped 4.7 per cent as the farm equipment maker warned of lower earnings in 2020.