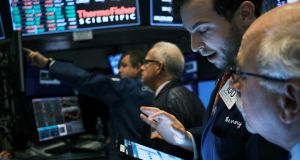 European shares posted their best day in six weeks on Monday, as transatlantic deals by Louis Vuitton owner LVMH and Swiss drugmaker Novartis, as well as hopes that the United States and China would seal a trade deal, boosted sentiment. Shares of LVMH rose 2 per cent as the French firm agreed to buy US jeweller Tiffany for $16.2 billion in its biggest acquisition yet. Tiffany’s lower-priced rival, Denmark’s Pandora , gained 1 per cent, while other luxury goods makers such as Gucci parent Kering, Italian jacket maker Moncler and London’s Burberry gained between 0.4 per cent and 2.7 per cent. “Some companies in the retail sector have complained about softer demand, but luxury brands tend to hold up well when economies cool as the mega rich usually fare better in a cooler economic climate,” said David Madden, analyst at CMC Markets in London.

The Iseq finished the session up 1 per cent at 6,893 but trading volumes were slim with little company-specific news. An exception was Ormonde Mining, which traded up 15 per cent after it announced it had shipped the first batch of tungsten concentrate from its Spanish mine. However, its shares were down in London, where it has its main listing, on foot of news that access to another part of the mine would be delayed.

Shares in AIB and Bank of Ireland, which have been under intense pressure in recent weeks, were up 3.3 per cent and 3.8 per cent respectively. Building materials group CRH was up 1 per cent at €34.07 ahead of a trading update on Tuesday while Iseq heavyweight Ryanair was up 0.8 per cent at €13.80. One analyst said trading had tapered off ahead of the Thanksgiving holiday in the US on Thursday.

The pound and the London markets both surged higher as strong polling for the Conservatives and reports of an improving US-China relationship buoyed trading sentiment. Typically, a strong performance by the pound can weigh down the international-focused FTSE 100, but it shot higher amid reports that the US and China are nearing a trade deal.

London’s top flight closed 69.48 points higher at 7,396.29 at the end of trading on Monday. In company news, shares in the Restaurant Group slumped after Wagamama, the pan-Asian chain it bought a year ago for £559 million, said it will face industry-wide headwinds in 2020. Shares in the Restaurant Group plunged by 12.9p to 133.1p at the close of play. Elsewhere, cream-cake maker Cake Box saw shares on the back of sweet sales and rising profits in the first six months of the financial year. Shares rose by 12.5p to 151.5p after the chain said pre-tax profits increased by 27 per cent to £1.7 million for the period.

Novartis shares were a big boost to the Stoxx 600 index on the back of the drugmaker’s $9.7 billion takeover of The Medicines Company, which seeks to expand its portfolio of medicines treating cardiovascular diseases. Travel and leisure and healthcare led gains across European sub-sectors, which were all in the positive territory. The pan-European Stoxx 600 closed 1 per cent higher at a four-year peak, as major stock indexes in United States hit record highs .

Among other stocks, Prysmian gained about 5 per cent after the cable maker’s troubled Western Link high voltage connection was taken over by clients, reducing further the near-term risk for the company. Spain-based wind turbine maker Siemens Gamesa jumped more than 8 per cent after Bloomberg reported that Germany’s Siemens was considering buying Iberdrola’s 8 per cent stake in the company.

The S&P 500 and the Nasdaq indexes hit record highs on Monday, as a report that the United States and China were nearing a trade truce sparked a rally in Apple and semiconductor stocks, with sentiment also buoyed by a raft of blockbuster deals. Gains in trade-sensitive chip stocks, including Applied Materials and Lam Research, helped lift the Philadelphia Semiconductor index 2.27 per cent after a Chinese state-backed tabloid said Beijing and Washington were “very close” to an initial pact. Tiffany & Co jumped 6 per cent and was the biggest gainer on the S&P 500 as the luxury jeweler agreed to a sweetened $16.2 billion deal with France’s LVMH. US discount brokerage TD Ameritrade Holding was up 6.4 per cent after larger rival Charles Schwab said it would buy the company in an all-stock deal valued at about $26 billion. Schwab rose 1.3 per cent . Ebay gained 1.4 per cent after the e-commerce major said it would sell ticketing unit StubHub to ticket reseller Viagogo for $4.05 billion in cash. - Additional reporting by Reuters