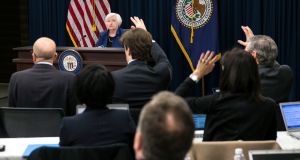 Janet Yellen, chair of the Federal Reserve, during a news conference on Wednesday. The Fed delivered a widely expected increase in its benchmark interest rate. Photograph: Al Drago

European shares hit their highest level in 15 months on Thursday after the Federal Reserve signalled no pick-up in the pace of monetary tightening as it raised interest rates the previous day, while investors breathed a sigh of relief as centre-right prime minister Mark Rutte won elections in the Netherlands.

Ryanair jumped 3.1 per cent to €14.57 after German flag carrier Lufthansa confounded the market by saying it expects profit to only fall slightly this year as it grapples with lower fares and a rising fuel bill. Analysts had been forecasting a sharp decline in the company’s earnings. Lufthansa gained 5.2 per cent in Frankfurt.

Smurfit Kappa advanced 1.6 per cent in Dublin to €25.56 as analysts welcomed news that Hamburger Containerboard, one of Europe’s largest independent producers of the recycled containerboard used to make cardboard boxes, announced plans to cut production. The industry grapples with rising raw material costs. Smurfit Kappa and others have been increasing their containerboard prices in recent times.

Bucking the trend, Independent News & Media (INM) dropped 1.8 per cent to 11 cent as investors positioned themselves ahead of the company’s full-year results next week. “The challenging outlook for INM persists as we approach its full-year results,” said Brian Devitt, citing “uncertainty” around the company’s acquisition strategy, an ongoing pensions dispute and absence of a dividend payment.

However, Arne Petimezas, analyst at AFS Group in Amsterdam, said Dutch markets were already outperforming on Wednesday, and rising shares were mainly driven by the US Federal Reserve’s dovish tone.

The Fed raised rates for the second time in three months on Wednesday as expected but did not flag any plan to accelerate its outlook for monetary tightening.

Basic resource stocks were boosted by a sharp fall in the dollar against major currencies on Wednesday in reaction to the Fed’s rate outlook.

Antofagasta, Fresnillo, BHP Billiton and Randgold Resources were up between 2 per cent and 4.7 per cent.

Italian insurer Generali rose 2.6 per cent as it pledged a higher dividend after reporting its best profit in nine years.

The blue chip FTSE 100 index rose 0.6 per cent, still ending at its highest level on record, even after paring some gains after it emerged that outgoing Bank of England policymaker Kristin Forbes unexpectedly voted for a rise in interest rates and others signalled it would not take much for them to follow suit.

Anglo American jumped 8.6 per cent after Indian billionaire and Vedanta Resources majority shareholder Anil Agarwal said he would buy a stake of up to £2 billion (€2.3bn) in the miner.

However, a number of ratings downgrades also put pressure on stocks, with drugmaker Hikma down 4.7 per cent after JP Morgan cut the stock to “neutral” from “overweight” and Merlin Entertainments down 2.9 per cent following a Berenberg downgrade to “sell”.

Bank stocks got a boost after the Federal Reserve on Wednesday raised interest rates for the first time this year.

Oracle surged to a record high of $46.99 after the business software maker issued a better-than-expected quarterly profit.

Meanwhile, Ardagh Group, led by Irishman Paul Coulson, which surged by almost 21 per cent on its first day of trading on Wednesday in New York, was having a more mixed session on its second day. By early afternoon it had fluctuated between gains of up to 2.3 per cent and dipping as much as 1.3 per cent into the red.