Stocks rise ahead of expected US interest rate later this week 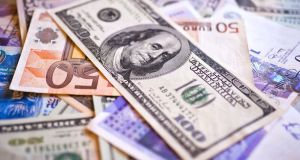 Sterling dropped on Tuesday after Britain’s parliament paved the way for Prime Minister Theresa May to launch divorce talks with the European Union, while stocks advanced ahead of an expected US interest rate later in the week.

European stocks were set for a mixed start, with financial spreadbetters expecting Britain’s Ftse 100 and Germany’s Dax to dip in early trade, while France’s Cac 40 was seen inching up.

The pound weakened 0.5 per cent to $1.2155 after both houses of parliament backed the so-called Brexit bill, opening the door for May to start the clock on the required two-year negotiation period by the end of this month.

On Monday, sterling had jumped 0.36 per cent after Scotland’s First Minister Nicola Sturgeon demanded a new independent referendum in late 2018 or early 2019, once the terms of the UK’s exit from the EU are clearer.

The MSCI’s broadest index of Asia-Pacific shares outside Japan was up 0.2 per cent, while Japan’s Nikkei closed down 0.1 per cent.

Shares of Toshiba closed up 0.5 per cent after plunging as much as 8.8 per cent, their biggest one-day loss in almost a month.

The company said it would “aggressively consider” a sale of most of Westinghouse and announced it had received approval from regulators to extend for a second time the Tuesday deadline for its official third-quarter earnings.

Its statement earlier in the session that it had requested the extension to expand a probe into problems at its US nuclear unit Westinghouse sent the shares tumbling.

Other China data on Tuesday was more upbeat and positive for the global economy, with investment and industrial output expanding more than expected, but investors feared those signs of strength may not be sustainable.

China has cut this year’s economic growth target to about 6.5 per cent to give policymakers more room to push through painful reforms to contain financial risks. The economy grew 6.7 per cent in 2016, the slowest pace in 26 years.

On Monday, Goldman Sachs upgraded Chinese stocks to “overweight” on better growth prospects and a bullish view on the country’s banking sector. Its strategists cited rising producer prices and easing credit stress, and a brighter credit outlook and loan pricing for banks.

Overnight, Wall Street was mixed, with the Dow Jones Industrial Average down 0.1 per cent, while Nasdaq rose 0.24 percent and the S&P was little changed.

With an interest rate hike this week by the Federal Reserve fully priced in, markets are focused on any clues from the U.S. central bank about the pace of future rises.

“On one hand, the market ponders a surprise hold, in which massive unwinding of positions could take place with the hike already priced in,” Jingyi Pan, market strategist at IG in Singapore, wrote in an note.

“On the other hand, concerns have also been paid to an acceleration in the Fed?s path to normalisation, where the likelihood of four Fed hikes has been raised, up from the current projection of three,” she said.

“The immediate reaction is likely to be seen in the dollar and upsides towards December?s high on the dollar index may be eyed.”

The dollar index was 0.2 per cent higher at 101.49, extending Monday’s gains following a bout of profit taking at the end of last week.

The dollar gained 0.1 per cent to 114.92 yen, but remains below the seven-week high touched on Friday on expectations of a Fed move at the end of a two-day meeting on Wednesday.

Markets are also awaiting a meeting of the Group of 20 finance ministers and central bankers in the German town of Baden Baden starting on Friday, their first meeting since Donald Trump won the US presidential election.

US Treasury Secretary Steven Mnuchin will be “pushing hard” to advance US interests in his debut G20 meeting, including reaffirming commitments to avoid competitive currency devaluations, a senior Treasury official said on Monday.

In commodities, oil prices dipped after touching a 3-1/2-month low in the previous session as concerns about rising U.S. production offset optimism about supply cuts by the Organization of Petroleum Exporting Countries.