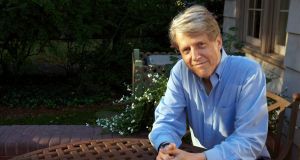 Economist Robert Shiller: One of the most hotly debated questions on Wall Street is why are traders so fixated on the upsides of a Trump presidency when the downside risks appear just as big? Photograph: Michelle McLoughlin/Reuters

The last time Robert Shiller heard stock market investors talk like they have been in recent weeks was in 2000, and it didn’t end well for the bulls. Back then, the Nobel Prize-winning economist says, traders were captivated by a “new era story” of technological transformation: the internet had redefined American business and made traditional gauges of equity market value obsolete.

Today, the game changer everyone’s buzzing about is political: US president Donald Trump and his bold plans to slash regulations, cut taxes and turbocharge economic growth with a trillion-dollar infrastructure boom.

“They’re both revolutionary eras,” says Shiller, who’s famous for his warnings about the dotcom mania and housing-market excesses that led to the global financial crisis. “This time a ‘great leader’ has appeared. The idea is, everything is different.”

For Shiller, the power of a new-era narrative helps answer one of the most hotly debated questions on Wall Street as stocks set one high after another this year: why are traders so fixated on the upsides of a Trump presidency when the downside risks appear just as big? For all his pro-business promises, the former reality TV star’s confrontational foreign policy and haphazard management style have bred uncertainty – the one thing investors are supposed to hate most.

Charts illustrating the conundrum have been making the rounds on trading floors. One, called “the most worrying chart we know” by Société Générale at the end of last year, shows a surging index of global economic policy uncertainty severing its historical link with credit spreads, which have declined in recent months along with other measures of investor fear.

The VIX index, a popular gauge of anxiety in the US stock market, has dropped more than 30 per cent since Trump’s election.

“I don’t generally call the entire market wrong – investors are very smart, highly motivated individuals – but I find it hard to say why stock markets are so un-volatile right now,’’ says Nicholas Bloom, a Stanford University economist who co-designed the uncertainty gauge with colleagues from the University of Chicago and Northwestern University.

The simplest explanation may be that share prices have less to do with Trump than with tangible improvements in the economy and corporate earnings. With the US unemployment rate well below 5 per cent and S&P 500 profits projected to reach all-time highs this year, perhaps it shouldn’t be surprising that equities are doing so well.

But there’s more to the market’s resilience than just numbers, according to Ethan Harris, Bank of America Merrill Lynch’s global economist in New York. Like the fable of the boy who cried wolf, Harris says pessimistic forecasters have so badly overestimated the consequences of big events – the rolling European debt crisis since 2010, the US debt-ceiling standoff in 2011, Brexit in 2016 – that traders have become conditioned to ignore them. Even when bears are right, the past eight years have shown that central banks are more than willing to save the day when markets fall.

“It’s been a period of repeated shocks, and I think people get toughened against that,” Harris says. “It seems like uncertainty is the new norm, so you just learn to live with it.”

For Hersh Shefrin, a finance professor at Santa Clara University and author of a 2007 book on the role of psychology in markets, the rally is just another example of investors’ remarkable penchant for tunnel vision. Shefrin has a favourite analogy to illustrate his point: the great tulip-mania of 17th century Holland. Even the most casual students of financial history are familiar with the frenzy, during which a rare tulip bulb was worth enough money to buy a mansion. What often gets overlooked, though, is that the mania happened during an outbreak of bubonic plague. “People were dying left and right,” Shefrin says. “So here you have financial markets sending signals completely at odds with the social mood of the time, with the degree of fear at the time.”

Shiller says when markets are as buoyant as they are now, resisting the urge to pile in is hard regardless of what else might be happening in society. “I was tempted to do it, too,” he says. “Trump keeps talking about a new spirit for America and so you could (a) believe that or (b) you could believe that other investors believe that.”

On whether stocks are nearing a top, Shiller can’t say with any certainty. He’s loathe to make short-term forecasts. Despite the well-timed publication of his book Irrational Exuberance just as the dotcom bubble peaked in early 2000, the Yale University economist had warned (with caveats) that shares might be overvalued as early as 1996. Investors who bought and held an S&P 500 fund in the middle of that year made about 8 per cent annually over the next decade, while those who invested at the start of 2000 lost money. The index sank 49 per cent from its high in March 2000 through a bottom in October 2002.

What Shiller will say now is that he’s refrained from adding to his own US stock positions, emphasising overseas markets instead. One factor that makes him cautious on American shares is the S&P 500’s cyclically-adjusted price-earnings ratio: while the metric is still about 30 per cent below its high in 2000, it shows stocks are almost as expensive now as they were on the eve of the 1929 crash.

“The market is way overpriced,’’ he says. “It’s not as intellectual as people would think, or as economists would have you believe.’’