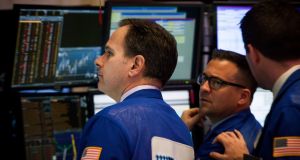 European indices sank on Tuesday after four days of gains, weighed down by bank and energy stocks, as well as uncertainty over elections in the Netherlands and a US interest rate decision.

British shares edged lower, weighed down by banking stocks as Britain gets set to start negotiating its departure from the European Union.

US stocks also drifted lower on Tuesday as oil prices fell for the sixth straight day and investors held off from making big bets ahead of the widely expected interest rate hike.

Bank of Ireland was among the worst-performing banks on European exchanges on Tuesday, finishing the session down almost 3.3 per cent. The Central Bank warned that Irish banks are not yet “stormproofed” in a report on Tuesday.

Applegreen finished the session behind by 1 per cent, despite revealing a dividend in its annual results. It was down up to 2.4 per cent in mid-morning trading, before regaining the ground later on.

Tullow Oil, which maintains its main listing in London, was down more than 4 per cent after the price of oil slid.

RBS was the worst-performing bank, down 2.5 per cent on the day, while Standard Chartered and Lloyds also dropped 1 to 1.2 per cent.

Prudential was the top FTSE gainer, its shares rising 3 per cent to a two-year high after the insurer reported a record profit for 2016, spurred by growth in its Asian business. The more domestically focused mid-caps index hit a record high in early trading, before turning down to close 0.4 per cent lower.

Oil services company Wood Group gave back all its gains from the acquisition of Amec Foster announced on Monday, and was among worst-performing mid-cap stocks, down 6 per cent, while Target Amec Foster fell 6.4 per cent.

Building materials supplier SIG rose 7.2 per cent after it named a new chief executive and said it planned to sell assets and review costs as it battles to recover from weak trading

German utility RWE was the biggest STOXX gainer, jumping 6.5 per cent after saying it might cut its stake in networks and renewables unit Innogy to 51 per cent. RWE, which also forecast a higher profit in 2017, did not comment on a Bloomberg report that France’s Engie was considering a bid for the company.

Innogy shares rose 4.3 per cent, but pared some of their earlier gains after French BFM TV reported that Engie was not interested in making a bid.

Fiat Chrysler rose as much as 2.6 per cent after Volkswagen CEO Matthias Mueller said he did not rule out possible merger talks with its Italian-American peer. Fiat pared the gains to end down 0.3 per cent.

Shares in Swiss drugmaker Galenica fell 5.1 per cent after the firm posted a drop in 2016 profit, saying that the acquisition of US-based Relypsa last year had a negative impact on the group’s results.

Trading volumes were light as a blizzard in the northeastern United States grounded flights and kept people indoors. Shares of airline stocks, including United Continental and American Airlines, took a hit.

All of the 11 major S&P sectors were lower, with the energy sector leading the decliners.

Oil prices slid to three-month lows after OPEC reported a rise in global crude stocks and a surprise jump in production from its biggest member, Saudi Arabia, despite a deal to curb supply.

The S&P energy sector was down 1.4 per cent, trading close to its lowest level since November 7th. Chevron was off 1.4 per cent and was the biggest drag on the Dow and the S&P 500.