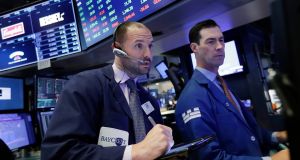 Markets rose on Thursday as global trade tensions eased and the Sky bidding war heated up.

Low-cost airline Ryanair was the surprise star performer in Dublin on Thursday, despite a strike by Irish-based pilots that forced it to cancel 30 of 290 flights.

Bookmaker Paddy Power Betfair surged 2.45 per cent to €96.20 on investor relief at England crashing out of the World Cup on Wednesday. A victory in the tournament for the team would have cost the Irish gambling giant more than €100 million, according to some estimates.

AIB gained 1.44 per cent to €492, while Bank of Ireland was up €6.73. Dealers noted that the National Treasury Management Agency’s call for the Government to sell its remaining holdings in Irish financial institutions generated momentum around both lenders.

Insulation and building materials specialist, Kingspan, shed 2.1 per cent to close at €40.98. Traders blamed profit-taking for the tumble. “The shares have had a strong run since Kingspan’s last update and now they are back trading at their 50-day moving average,” said one. “It’s mostly just profit taking, there’s no negative news behind it.”

Ingredients and convenience foods group, Kerry, was up 1.9 per cent at €92.50, one of a number of stocks that gained ground and aided the Irish market in outperforming its peers.

Broadcaster Sky soared to an 18-year high on Thursday after US entertainment giant Comcast offered £14.75 a-share – £24.5 billion – for the group, trumping an earlier £14 a-share bid by Rupert Murdoch.

Sky’s shares reached 1,548 pence at one point, before closing at 1,545p, up 3.41 per cent on the day. Comcast says it has the backing of Sky’s independent directors. Mr Murdoch, who launched Sky in the first place, owns 39 per cent of the group, which broadcasts sport, films and TV to 23 million European homes.

Dart Group, owner of budget airline Jet2 and Jet2 Holidays, surged 35 per cent to 999.5 after reporting a 49 per cent leap in pre-tax profits to £135 million.

Dart, a rival of Irish giant Ryanair, said that it expected profits for its current financial year, which ends next March, to exceed expectations as demand has grown strongly in recent months.

Irish bookie Paddy Power Betfair climbed 2.5 per cent to 8,510p in London, where it has its main listing.

Asos shares sank 10.5 per cent after the online fashion retailer missed forecasts for sales growth in its latest trading period and said full-year growth would likely be at the lower end of its guidance.

Satellite operators had a strong session with France’s Eutelsat announcing it was joining rivals Intelsat and SES in a proposal to free up spectrum for the rollout of 5G mobile networks in the US. Eutelsat rose 3.4 per cent and SES rose 1 per cent.

Gerresheimer rallied 7.6 per cent after the German drugs packaging maker raised the lower end of its revenue growth guidance and unveiled a €350 million acquisition to expand in the field of digital drug delivery devices.

Gains by tech stocks early on Thursday afternoon helped overshadow fears about US-Chinese relations. Microsoft and Cisco Systems were both up 2.1 per cent, while chip maker Intel rose 1.9 per cent. Aircraft maker Boeing gained 1.3 per cent, despite it being seen as vulnerable to the fallout from any trade war. – Additional reporting, Reuters

If lockdown has morphed from tactic to strategy, the State has failed 05:59
John FitzGerald: North needs reform more than unity 05:53
Company boards must serve more than just investors 05:43
Unresolved grief can extort high price on worker’s wellbeing 05:30
Open for business: How industry has adapted to survive the lockdown 06:24