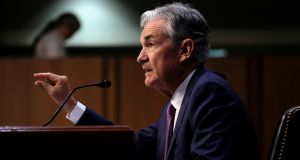 Both Wall Street and Europe saw shares rise on Tuesday as stocks were buoyed by Federal Reserve chairman Jerome Powell’s optimistic view on the US economy.

Encouraging results in the US and Britain were also a help, although the FTSE’s gains were capped by Brexit uncertainty.

Ireland underperformed peers although Ryanair recovered some ground despite another notice of strike action.

Ireland’s benchmark Iseq overall index underperformed European peers and despite a reversal in fortunes for budget airline Ryanair the index closed lower by 0.24 per cent.

Europe’s largest airline by passenger numbers recovered on Tuesday despite the notice of further strike action to take place this Friday. As with its peers IAG and EasyJet Ryanair advanced to €16.04, up 1.17 per cent. Oil was slightly weaker on the day.

There was heavy volume in unusual places on the day with big trades recorded in Cairn Homes and Total Produce. Housebuilder Cairn fell 2.11 per cent to €1.762 while fruit and veg company Total Produce was lower by 0.94 per cent at €2.11.

Kenmare Resources, which reported second quarter results on Tuesday, advanced 3.58 per cent to €2.52, albeit on light volume, after showing improvements in its operating numbers.

The FTSE 100 ended the session up 0.3 per cent in line with European benchmarks.

Royal Mail Group rose 1.8 per cent, paring back some earlier gains, after its results showed better than expected parcel growth.

Telecoms firm TalkTalk jumped to the top of the FTSE 250, rising 8 per cent after its results showed strong subscriber growth with 80,000 adds.

In other mid-cap movers construction company Galliford Try rose 4 per cent after it forecast lower debt levels for the year ended June 30.

Bookmaker Paddy Power Betfair declined 3.2 per cent, the biggest faller on the FTSE 100, after Investec downgraded the stock to “sell”.

Telecoms stocks fell the most, down 1.2 per cent, weighed down by a 4 per cent drop in Telenor after the Norwegian telecoms operator posted second-quarter results that lagged forecasts.

The declines were offset by strength in banks and a rebound in mining stocks.

The pan-European STOXX 600 index was up 0.2 per cent at its close while Germany’s DAX closed 0.9 per cent higher.

Husqvarna fell the most on the STOXX, 17.4 per cent, after the world’s biggest maker of outdoor power tools posted an unexpected drop in operating profit.

Banks, buoyed in the previous session by better-than-expected earnings from Deutsche Bank, declined.

SEB gained 4.3 per cent after net interest income at the Swedish bank beat forecasts thanks to strong corporate demand.

Thyssenkrupp jumped more than 9 per cent after chairman Ulrich Lehner quit, raising hopes of a restructuring at the German conglomerate.

Helping bolster market optimism was Johnson & Johnson, which rose 4 per cent after the healthcare giant beat quarterly profit estimates on strong demand for cancer drugs. The stock gave the biggest boost the S&P 500 and the blue-chip Dow Jones Industrial Average.

Netflix slumped 8 per cent and was on track for its biggest one-day drop in two years after the company’s quarterly subscriber growth missed expectations, fanning fears that its rapid expansion is slowing.

UnitedHealth dropped 3.5 per cent and was the biggest drag on Dow after the health insurer reported quarterly medical costs that were slightly higher than expectations.

Goldman Sachs slipped 1.3 per cent after reporting trading results that were weaker than some rivals, with analysts pointing out that its better-than-expected profit was due to low-profile businesses such as investing and lending.