US shares edge near five-month high but financials disappoint

Little volume on Irish exchange with benchmark index up 0.38 per cent 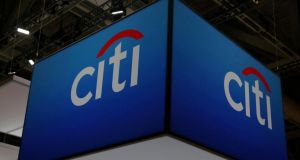 Citigroup fell the most of US financials after its revenue fell short of estimates due to lower debt underwriting. Photograph: Chris Helgren/Reuters

The US S&P 500 index moved towards five-month highs as industrial gains offset a drop in financials. Ireland’s benchmark index closed up although on light volumes.

European shares scored their second week of gains as optimism around the next corporate earnings season grew although the FTSE was flat on the day.

A quiet day on the Irish market closed out a muted week with volumes on Friday below average. Nonetheless, the benchmark Iseq overall index closed up 0.38 per cent.

Property names were reasonably strong on the day with Green Reit and Ires both increasing in excess of 1 per cent.

It was in financials where volumes were somewhat decent with more than 5.5 million shares traded in AIB. The stock closed flat on the day while Bank of Ireland advanced 0.52 per cent to €6.765.

Following its trading update last week, C&C carried on performing well. On Friday, the drinks maker closed up 1.14 per cent at €3.535.

The FTSE index closed up 0.1 per cent but was earlier up as much as 0.8 per cent after a Donald Trump interview that appeared to dismiss hopes of a US-British trade deal, depressing the pound.

While the corporate earnings season has yet to get properly under way in Europe, a few companies saw their shares move on the back of updates.

DCC was a top gainer, up 3.6 per cent after the support services company’s first quarter trading update, in which it reaffirmed its full year guidance.

On the mid-cap index, shares in UK recruiter Hays were the biggest risers with a gain of more than 8 per cent.

The pan-regional Stoxx 600 index rose 0.2 per cent supported by a broad range of sectors, from industrials to technology, bringing its weekly gain to 0.8 per cent.

Altran Technologies tumbled 28 per cent after the French technology consultancy said it had discovered a case of forged purchase orders within its recently-acquired US design and engineering services firm Aricent. The forgery “relates to one individual, in his relation with one client” for an amount of $10 million, Altran said, adding that an investigation into Aricent’s internal control procedures had been launched.

Switzerland’s GAM Holding fell about 15 per cent as it said it would take an impairment charge of about 59 million Swiss francs (€50.4 million) related to its 2016 acquisition of British hedge fund Cantab Capital Partners.

Results from three of the biggest Wall Street banks failed to live up to expectations. Citigroup slid the most among financials after its revenue fell short of estimates due to lower debt underwriting.

Netflix fell after Deutsche Bank warned the company could fall short of subscriber growth numbers when it reports results on Monday.

McDonald’s fell after the Iowa and Illinois health departments said they were investigating cyclospora infections linked to salads at its restaurants.

Johnson & Johnson dropped the most on the Dow after a jury ordered it to pay a record $4.69 billion to 22 women who alleged its talc-based products contain asbestos and caused them to develop ovarian cancer.