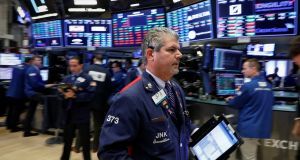 Oil prices dropped 3 per cent on Monday, putting pressure on energy shares and keeping global stock markets in check, although financial shares rallied after upbeat news from Bank of America and Deutsche Bank.

In oil markets, concerns about supply disruptions eased and Libyan ports reopened while traders eyed potential supply increases by Russia and other producers. US crude fell 4.03 per cent to $68.15 per barrel and Brent was last at $72.11, down 4.27 per cent on the day.

Kilkenny-based Glanbia rose 1 per cent to €15.55 after announcing plans for a major mozzarella cheese manufacturing facility in Portlaoise, which will see the creation of 78 new jobs.

The FTSE 100 was knocked after oil prices slumped during Donald Trump’s historic meeting with Russian president Vladimir Putin in Finland. Brent crude prices were down by as much as 3.75 per cent to $72 per barrel as traders anticipated the outcome from the Helsinki summit. BP and Shell fell by 2.3 per cent and 2.1 per cent respectively, and mining stocks were also knocked, with BHP Billiton falling by 2.48 per cent or 41p to 1,609.2p. The FTSE 100 closed down 0.8 per cent or 61.42 points at 7600.45.

Debenhams’ shares fell out of fashion again on Monday following reports that credit insurers have reduced cover for suppliers to the struggling department store chain. Credit insurance company Euler Hermes is among those to have pulled some cover, while Atradius and Coface have refused to cover new shipments, according to the Sunday Times.

Shares were knocked by 4.8 per cent or 0.71p to 14p. The news comes after Debenhams issued its third profit warning this year in June. Shares in pharmaceuticals group Indivior rocketed after a US court imposed a preliminary injunction on a rival firm selling or importing a generic version of one of its key drugs.

Overall in Europe, the pan-European FTSEurofirst 300 index lost 0.29 per cent. MSCI’s gauge of stocks across the globe shed 0.15 per cent. Investors were watching for any developments from a meeting between the leaders of the United States and Russia. Results drove some of Europe’s biggest movers. Deutsche Bank shares jumped 7.3 per cent to a six-week high after the German lender reported preliminary second-quarter results above consensus with a better-than-expected capital buffer. Worries over the bank’s solvency have cratered its shares, down 36 per cent year to date.

Wall Street was mostly flat on Monday as a slump in oil prices dragged energy shares lower, offsetting a jump in financial stocks after Bank of America’s strong results reinforced expectations of earnings growth for US companies. The S&P energy sector fell 1.36 per cent, the most among the 11 major S&P sectors. Shares of Exxon slid more than 1.0 per cent and Chevron fell 1.3 per cent. The stocks were the biggest drags on the benchmark index.

In contrast to a slide on Friday after JPMorgan, Citigroup and Well Fargo reported results, bank stocks rose. Financials were the biggest boost to the Wall Street’s three major indexes.

Separately, shares of Arconic jumped 9.8 per cent on a report that maker of aluminum parts used in planes cars and buildings is the subject of takeover interest from private-equity firms. Amazon. com gained 1.1 per cent and was among the top boosts to the benchmark index as its “Prime Day” shopping event kicked off.