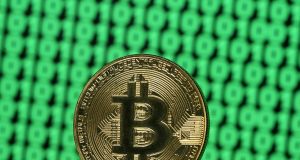 By midday Monday, traders had swapped more than 3,000 Cboe contracts as prices swung more than $3,000 per bitcoin. Photograph: Dado Ruvic/Illustration/Reuters

More than $50 million worth of bitcoin futures traded on their first day in financial markets, representing a modest but significant sum for derivatives on a digital currency whose underlying utility is still a matter of debate.

The new contracts debuted on Cboe Global Markets, the Chicago-based exchange operator that was first to market in response to growing interest in cryptocurrencies.

By midday Monday, traders had swapped more than 3,000 Cboe contracts as prices swung more than $3,000 per bitcoin, and were last up 15 per cent at $17,810. While volumes were low, early price surges twice halted trading as they triggered Cboe circuit breakers. Onlookers crashed the website due to heavy traffic.

Ed Tilly, Cboe chief executive, said that nearly 20 different trading groups tried out the contracts on the first day. “Those who said they were going to be there were there,” he said.

The arrival of bitcoin futures marks a seminal moment for a cryptocurrency engineered as an alternative to the global monetary system and as a potentially disruptive means of conducting financial transactions. CME Group, the world’s largest exchange company, is set to list competing futures next week.

Traders said activity was muted, if volatile, on Cboe, with most orders no more than a contract or two in size.

“It’s a slow start, but also not as slow as I expected it to be,” said Garrett See, chief executive of DV Chain, a Chicago-based cryptocurrency trader.

Mr See said he anticipated few people would be able to start trading from day one because only a handful of brokers had agreed to clear the novel products and their rapid launch left little time to get ready. Interactive Brokers, the retail brokerage, estimated its customers made up nearly 50 per cent of the volume traded at Cboe.

The total market value of bitcoin is now almost $300 billion after a price surge this year, despite financial institutions shying away. Its launch on regulated exchanges such as Cboe could tempt in more traditional asset traders. Most bitcoin is traded on relatively new, unregulated cash bitcoin exchanges, some of which have suffered outages as traders overwhelm these systems.

“These other exchanges operate in the seamy underbelly of the financial system, and now they’re going to be out in the light of day,” said Joe Guinan, chief executive of broker Advantage Futures in Chicago.

On Monday, there was a near-$1,500 difference between the futures contracts that expired in mid-January and the $16,450 it cost to buy bitcoin immediately on private cryptocurrency exchanges.

“[The difference] reflects the gap between the physical and the futures market and it may stay till there’s more comfort around the settlement price,” said Mr Tilly.

The contracts are settled in dollars, meaning participants are trying to predict 30 days in advance the settlement price of the contract. Cboe will rely on data provided by Gemini Exchange, one of the smaller cryptocurrency exchanges.

Traders also said the lower price of bitcoin reflected the difficulties of trading on bitcoin exchanges and the added risk of digital storage, given the prevalence of bitcoin heists by hackers.

Bobby Cho, head of trading at Cumberland, a Chicago-based cryptocurrency trader, said the level of activity reflected “people just dipping their toe in and making sure the plumbing is working”. One constraint on volumes was that “not everybody can access this market,” he added.