Weak pound boosts the FTSE 100 while European shares slip back 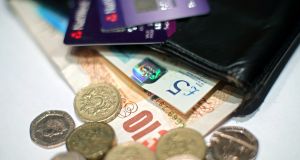 The FTSE 100 emerged as a top performer among its European peers, boosted by an extended sterling sell-off linked to investor jitters around Brexit. London’s blue chip index rose 0.8 per cent, while continental indices suffered. The French Cac 40 and German Dax fell 0.23 per cent each.

The Iseq index tracked the performance of its European peers, falling 0.2 per cent.

Housebuilder Cairn Homes performed strongly, finishing the session up more than 2.5 per cent on the back of positive news about the pace of housebuilding in Dublin.

Ryanair fell more than 4 per cent after news emerged in the afternoon that some Dublin pilots have voted in favour of industrial action at the airline. This comes on top of similar vote by Italian pilots last week.

In oil markets, Brent crude prices were up nearly 2 per cent at $64.57 per barrel, amid news that a key North Sea pipeline would be closed after a crack was found. Tullow Oil was one of the biggest beneficiaries, up 4 per cent in London (although unchanged in its secondary Dublin listing).

The weaker pound supported the FTSE 100’s rise, as many of its listed multinational firms tend to benefit when foreign currencies are stronger.

HSBC shares were up 18.5p to 751.7p after the US Department of Justice said it would ask a court to dismiss deferred criminal charges against the bank in light of its efforts to strengthen safeguards against money laundering. HSBC originally signed the agreement in order to avoid charges for allegedly laundering millions of dollars from the likes of Mexican drug rings.

Centrica shares were among the worst performers on the FTSE, ending the day down 2.6p at 141.5p. It comes amid news that the British Gas and Bord Gáis owner has launched a European exploration and production joint venture.

Away from the top tier, Hollywood Bowl shares jumped 13p to 203p as the 10-pin bowling operator reported a sharp rise in full-year pre-tax profit from £2.6 million to £21.1 million on the back of growing sales and new site openings.

Chipmaker Dialog Semiconductor was among the biggest fallers, down 3.2 per cent, along with software firm Temenos and video games producer Ubisoft.

UBS rose 1.3 per cent and Denmark’s Danske Bank gained 2.1 per cent. Deutsche Bank fell 0.9 per cent, despite its finance chief telling a German paper that it was able to cope with stricter capital rules agreed last week.

Top gainers on the STOXX were South African retailer Steinhoff, which rose 24.4 per cent to break three sessions of dramatic losses stemming from its discovery of accounting irregularities. Altice, the French telecoms and cable firm jumped 11.1 per cent in a slight relief rally.

AB InBev reversed early gains to edge 0.1 per cent lower after Reuters reported it is among the brewing groups looking to bid for a stake in Vietnam’s largest brewer in a $5 billion sale process.

Interest in the surge in bitcoin and opening of futures trading continued to fuel bets on crypotcurrency related stocks, many of which have risen exponentially in value in the past three months.

Shares of Marathon Patent, Riot Blockchain, Overstock. com and Xunlei were up between 7 per cent and 20 per cent in the day. Bitcoin futures jumped more than 20 per cent in the US debut on Sunday, which backers hope will encourage wider use and give legitimacy to cryptocurrency.

Among other movers, CenturyLink was the biggest S&P 500 gainer, rising about 10 per cent after the telecom provider signed a five-year contract with the Commonwealth of Pennsylvania.

1 Will your boss let you work long-term from home – or from abroad?
2 House asking prices rebound but will likely fall again - MyHome
3 AA Ireland bought by Olivier Sarkozy-led fund for over €200m
4 Revolut shifts regulation of Irish customers to Lithuania
5 Google tells workers to return to country where they are employed
6 Plans for €2bn Dart expansion lure Bombardier to Dublin
7 Ryanair tells Minister it will close Cork and Shannon unless EU travel plan is adopted
8 Subway bread too sweet for the Irish tax authorities
9 City firms move £1.2tn and 7,500 jobs out of London - EY
10 Technology giant Google pledges $1bn to pay for news
Real news has value SUBSCRIBE