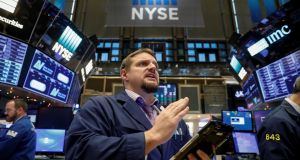 Stocks globally reached a record high on Wednesday ahead of a widely expected interest rate increase by the US Federal Reserve.

Political jitters hit Italian stocks on Wednesday however and the broader European market slipped later in the day. Italy’s parliament will be dissolved between Christmas and the new year, with national elections probably set for March 4th, a source said on Wednesday.

Concern that no clear majority will emerge caused Italy’s FTSE MIB index to fall 1.4 per cent while sovereign Italian bonds also fell. Italian banks, which have large exposure to government debt, fell 2.9 per cent, their biggest one-day fall since May.

It was a sluggish day in Dublin on Wednesday with the Iseq index closing virtually unchanged at 7,014.27.

Among the main movers was Ryanair, which was down 1 per cent to €16.73 after hovering around the €17 mark for most of the day. Speculation that a pilot strike could widen led to a sell-off.

FBD was up nearly 2 per cent to €10.19. Volumes were light but the stock has continued to rise and is up 10 per cent over the last month. Paddy Power Betfair had a good day on the back of decent newsflow on the sector in recent weeks. It closed up 0.6 per cent in Dublin to €97.05.

Elsewhere, the Reits were in decline with Green Reit and Hibernia Reit both down 1 per cent. Hotels group Dalata was up 1.4 per cent to €6.05.

British shares steadied on Wednesday as investors’ anticipation of a rate rise from the US Fed drove financial stocks higher while high-yielding consumer stocks suffered. The FTSE 100 and mid-cap indices ended less than 0.1 per cent lower, outperforming the broader European market which fell ahead of the rate decision. The prospect of rising rates in the US drove sector performance, boosting financials while dragging on housebuilders and consumer stocks.

Financials were the best performers, led by HSBC, whose international footprint makes it easier for it to benefit from higher US rates. The stock was up 1.5 per cent and the strongest boost to the index. Barclays also gained 1.6 per cent. Among fund managers, retail platform Hargreaves Lansdown made strong gains, up 4.4 per cent at the top of the FTSE, while Schroders rose 1.6 per cent.

Housebuilders, which have benefited from historically low interest rates, were broadly lower. Barratt Development, Taylor Wimpey and Persimmon all fell.

Zara fashion chain owner Inditex rose by 1.7 per cent after reporting net profit to September of €2.3 billion, a 6 per cent gain

Swedish builder NCC fell 8.9 per cent after it warned on Wednesday its operating earnings for the fourth quarter would be “close to zero”. Supermarket group Colruyt declined more than 7 per cent fall after Barclays cut its target price for the stock. Aurubis, Europe’s biggest copper smelter, slid 2.6 per cent on disappointing earnings.

US stocks inched higher in early trading powered by technology stocks but shares of big banks lost steam ahead of a widely-expected interest rate hike in the afternoon.

Tech stocks lifted major Wall Street indexes, with Apple and Facebook rising about 1 per cent each. Shares of JPMorgan and Bank of America fell about half a per cent each, dragging down the financial stocks as US treasury yields fell on the back of a disappointing November inflation report.

Among other big movers, Western Digital gained more than 3 per cent and was the biggest tech gainer after the company agreed to settle a dispute with Toshiba. Shares of Finisar soared about 30 per cent after Apple said it would invest $390 million in the chipmaker. – Additional reporting: Reuters