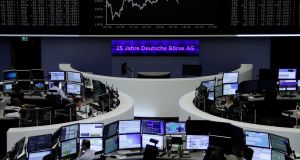 The German share price index, DAX board, at the the stock exchange in Frankfurt, Germany. The DAX rose almost 0.5 per cent. Photograph: Reuters

Mergers and acquisitions were the dominant influence on European share trading on Tuesday, while strength in oil stocks after a pipeline shutdown helped lift a key regional benchmark index to five-week highs.

The pan-European Stoxx 600 index climbed 0.7 per cent to its highest level since November 9th.

The Iseq closed flat as the gains made by many of its major stocks were offset by a 1.3 per cent slip for the largest company on the index, building materials group CRH. The cement-maker closed at €29.48 amid data showing a significant contraction in the US highway construction market in October.

Cairn Homes rose 0.9 per cent to €1.85. The housebuilder will be listed in the Iseq 20 index from Friday, the Irish Stock Exchange said, at the expense of travel software firm Datalex, which fell 2.1 per cent to €3.18.

Ryanair finished down 0.15 per cent at €16.90. The Irish Airline Pilots’ Association served the airline’s management with a strike notice, which will lead to disruption for some passengers on December 20th.

UK shares rose to their highest in a month on Tuesday as rising oil prices boosted energy stocks and the pound retreated, even though UK inflation rose to its highest in six years. A cheaper pound generally supports the FTSE 100 as the weaker currency translates into an accounting boost for large companies with overseas revenues. The blue-chip index closed up 0.6 per cent.

Energy stocks provided the most support, as oil rose above $65 a barrel for the first time since mid-2015 after the shutdown of the UK’s biggest North Sea pipeline. BP gained 2.5 per cent and Royal Dutch Shell 1.7 per cent.

UK inflation figures, which showed prices rising at an annual rate of 3.1 percent in November, had little impact on sterling.

Supermarkets Sainsbury and Morrison were the worst performers, down 4.1 per cent and 4.5 per cent respectively, after data released by market researcher Kantar Worldpanel showed both lagged behind Tesco in sales growth.

Miner and trader Glencore lost 1.1 per cent after a market update for its marketing division. Fresnillo lost 1.5 per cent.

Gemalto surged 34.6 per cent after French tech consultancy Atos tabled an all-cash bid valuing the Dutch cybersecurity company at €4.3 billion. Gemalto shares, which have been dented by four profit warnings in a year, led gainers on the Stoxx on Tuesday and helped the tech sector bounce 1.7 per cent.

Atos shares rose 7.1 per cent to the top of the Cac 40. In other deal-driven moves, Unibail-Rodamco declined 4.1 per cent after the French commercial real estate group offered to buy shopping mall owner Westfield Corp for $16 billion.

Gains for Wall Street stocks were pared after Republican senator Rand Paul tweeted opposition to adding to the federal debt. The dollar held its gain and treasuries slipped after data showed signs of inflation in producer prices as the Federal Reserve starts its two-day meeting.

Bank stocks gained ahead of a near-certain move by the Federal Reserve to raise interest rates on Wednesday. Goldman Sachs rose 2.4 per cent and JP Morgan and Bank of America gained about 1 per cent. The stocks lifted the S&P financial index by 0.9 per cent.

Boeing rose as much as 3.4 per cent to $292.8 after the company said it would raise its quarterly dividend by 20 per cent.

1 Admission of mistake in Oxford vaccine dose raises doubts over reliability
2 Direct sea routes to Europe offer certainty in choppy Brexit waters
3 Anti-alcohol zeal of public health experts peppers reopening debate
4 ‘I don’t need to do any of this. . .I don’t actually need to work.’
5 Pandemic brings a halt to Zara-owner’s Irish expansion
6 ‘Make plans but don’t hold on to them too seriously’
7 Cliff Taylor: Deal or no deal we are now heading for a hard Brexit
8 Move to EU or face disruption, City of London is warned
9 Topshop owner fights for surivival putting Irish jobs at risk
10 State may face €1bn in compensation in Covid-19 case, Press Up claims
Real news has value SUBSCRIBE