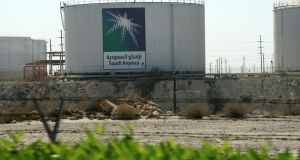 The London Stock Exchange is working on a new type of structure that would make the exchange more attractive for Aramco. Photograph: Reuters/ Ali Jarekji

Britain wants to loosen rules on listing state companies in a move that could help London win the lucrative IPO of oil giant Saudi Aramco but which has raised fears for minority investors.

The Financial Conduct Authority’s proposals on Thursday would create a new listing category for companies controlled by sovereign states and come as exchanges vie to win the Aramco initial public offering, which is set to be the largest ever.

But they met with criticism from British fund managers, who have already expressed concerns about Aramco’s governance.

“Investors believe a premium listed segment without these investor protections is not a premium segment and will not provide the protections that investors expect,” Chris Cummings, chief executive at the Investment Association said.

Reuters reported earlier this year that the London Stock Exchange was working on a new type of structure that would make the bourse more attractive for Aramco.

“No decision has been made on the venue yet,” a source close to Aramco told Reuters following Thursday’s proposals, which come as the government and City of London are trying to keep Britain’s financial markets attractive to international investors and companies after it leaves the European Union.

The FCA is proposing a new “premium” stock market listing category that will exempt companies controlled by sovereign states from certain requirements and also be available to companies listed in London using depositary receipts, financial instruments used to represent a foreign company’s shares.

Companies including Russian state firms Gazprom and Rosneft use depositary receipts on the LSE.

“Refining the listing regime in this way would make UK markets more accessible whilst ensuring that the protections afforded by our premium listing regime are focused and proportionate,” FCA chief executive Andrew Bailey said.

“It looks like the FCA is consulting on amending the existing listing rules to accommodate the peculiarities of one company, which is not a very effective strategy for regulating the market as a whole,” Hamilton Claxton said.

The London Stock Exchange has made winning the listing of Aramco a priority, with the firm’s chief executive Xavier Rolet joining prime minister Theresa May on a trip to Saudi Arabia in April. The pair met jointly with the kingdom’s sovereign wealth fund, which will play a major role in the listing decision.

The FCA’s Mr Bailey told Reuters he had not discussed the proposal with the government.

“It was not instigated by the government or the LSE which we regulate,” he said.

The New York Stock Exchange, which is also competing for the Aramco listing, has not offered any such regulatory changes, a source familiar with talks between NYSE and Aramco said.

However, it already has certain features that would attract Aramco, including not setting any minimum requirement for the proportion of a company’s stock that has to be listed.

London usually requires a “free float” of at least a quarter of a company’s shares, although under the proposals a sovereign-backed company could circumvent this if it issued depository receipts representing a small proportion of the overall firm.

Under the plans, sovereign-controlled companies will be able to get a “premium” listing without complying with certain rules on related party transactions and controlling shareholders.

The changes are likely to make London more attractive to state-controlled companies as several Gulf countries, including Oman and Abu Dhabi, are considering listing oil assets.

“This is a clever solution to the dilemma of Aramco, which does not meet the general requirements regarding free-float and corporate governance,” Edward Bibko, head of capital markets in Europe, Middle East and Africa at law firm Baker McKenzie, said.

At present companies which do not meet Britain’s “premium” listing requirements must take a standard listing which is seen as second best as it has lower corporate governance requirements and does not qualify for entry into most stock indices.

The FCA said sovereign owners were different “in both their motivations and their nature” from private ones so it was legitimate to grant them an exemption from some of the requirements for private companies.

“We believe that investors and the market are sufficiently able to assess the additional risks arising from sovereign ownership,” it said in the consultation document.

The FCA has set a deadline of Oct 13 for comment on the proposals, which are part of a wider review it is undertaking into Britain’s listing rules but were brought forward because it said it thought there was a gap in its current rules. – Reuters

1 Banks move to avert fresh arrears crisis
2 Michael Smurfit: total lockdown of economies a ‘serious mistake’
3 Pandemic Unemployment Payment: Your questions answered
4 Stocktake: History says this is not a bear market rally
5 Joint accounts: if one of us dies, can the other access the money?
6 HSBC board rethinks overhaul and seeks even deeper cuts
7 Satirical column and photograph of child among complaints to Press Ombudsman
8 Johnny Ronan plans boutique hotel after paying €3.8m for Dublin docklands houses
9 Cairn Homes seeks permission for 611 apartments on RTÉ site
10 Tesco to manage customer numbers with 3D imaging system
Real news has value SUBSCRIBE