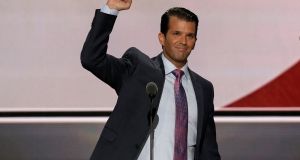 Emails released by Donald Trump jnr on Tuesday show he agreed last year to meet a woman he was told was a Russian government lawyer who might have damaging information about Democratic White House rival Hillary Clinton. Photograph: Reuters

Ms Yellen will give her semi-annual monetary policy testimony before Congress later on Wednesday and on Thursday, and investors will be parsing it for clues on when the Fed will start reducing its massive balance sheet. Her remarks will follow words from Fed governor Lael Brainard that disappointed some dollar bulls.

Emails released by Donald Trump jnr on Tuesday showed he agreed last year to meet a woman he was told was a Russian government lawyer who might have damaging information about Democratic White House rival Hillary Clinton as part of Moscow’s official support for his father.

The meeting could lead investigators to probe whether he violated US election law, experts said.

Investors’ mood turned more hopeful later in the session after US Senate Republican leader Mitch McConnell announced a two-week delay in the Senate’s August recess to provide more time to work on legislation and approve nominees, which could lead to progress on tax reform and fiscal stimulus.

Even after the news of the longer session, “the US dollar did not return to beginning-of-the-day levels”, said Bill Northey, chief investment officer at US Bancorp Wealth Management in Helena, Montana.

While the dollar was buffeted by the political headlines, it remains underpinned against the yen by divergent monetary policy expectations for the Federal Reserve and the Bank of Japan, he said.

Ahead of Ms Yellen’s remarks, Ms Brainard said the central bank should soon begin reducing its balance sheet, as long as economic data on US jobs and growth holds up.

But she wasn’t as hawkish as some investors hoped, saying that once balance sheet reduction is under way, she will assess inflation before deciding on further interest rate increases.

“I didn’t think Brainard’s comments would continue to have an influence in the Tokyo session, but the market seems to have weaker expectations of the Fed’s tightening, and US treasury yields are dropping,” undermining the dollar, said Masashi Murata, senior currency strategist at Brown Brothers Harriman in Tokyo.

Philadelphia Fed president Patrick Harker, a voter on the Federal Open Market Committee, said in an interview with the Wall Street Journal on Tuesday that if inflation did not move toward the Fed’s 2 per cent target, then this would be a reason to hold off raising rates.

The Canadian dollar was slightly higher against its US counterpart as investors awaited a Bank of Canada interest rate decision later on Wednesday.

While forecasters remain divided on whether the central bank will raise rates, data from the overnight index swaps market showed that money markets have priced in a hike, as well as a second hike before the end of the year. – (Reuters)