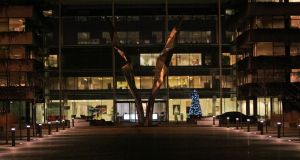 AIB’s HQ: the bank breached the €5 level in its seventh day of trading since returning to the main stock market in Dublin

AIB breached the €5 level in its seventh day of trading since returning to the main stock market in Dublin, amid a global surge in banking stocks, with oil and gas exploration companies also in demand as price of the oil rose.

The pan-European Stoxx 600 index kicked off the first day of trading in the second half of the year by rising 1.1 per cent to 383.41.

AIB rose almost 3 per cent to €5.097, bringing the stock’s advance since it floated on June 23rd to almost 16 per cent, and Bank of Ireland added 2.2 per cent to 23.5c, as banking stock globally advanced on a growing expectation that central banks, including the European Central Bank, could move away from stimulus measures such as massive bond purchases and ultra-low interest rates.

Applegreen edged almost 1 per cent higher to €5.25 after the Competition & Consumer Protection Commission approved the petrol and forecourt retailer’s €15.7 million acquisition of a 50 per cent stake in fuel terminal in Dublin port.

Oil exploration company Providence Resources was the top performing stock as oil futures rose as much as 1.5 per cent, adding to an 8.3 per cent gain over the previous seven sessions, as new data pointed to a drop in US production and drilling activity. This has eased concerns that US crude production is ramping up too aggressively.

Bucking the trend, life sciences and pharmaceutical companies were out of sorts, with Malin Corp declining by 5.4 per cent and Amryt Pharma falling 3.6 per cent.