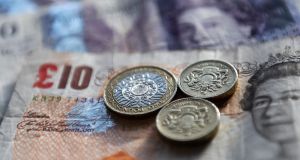 Sterling edged lower to 1.2870 against the dollar in early trades and has weakened more than 1 per cent since it hit a one-month high above 1.30 last week

Sterling hit an eight-month low against the euro following Bank of England deputy governor Ben Broadbent keeping silent on his views about interest rates on Tuesday, prompting financial markets to assume he sees no pressing need to change.

Mr Broadbent’s speech in Aberdeen to the Scottish Council for Development and Industry had been keenly watched as a chance to hear the views of a rate-setter who has not commented publicly since the Monetary Policy Committee came unexpectedly close to raising interest rates for the first time in a decade last month.

Sterling also softened to near 10-day lows against the US dollar on Tuesday as tepid consumption data and business surveys underlined the challenges facing the British economy.

British households spent more money on food and other essentials last month but held back on less urgent purchases as they faced rising prices, two sets of industry figures showed on Tuesday.

Sterling edged lower to 1.2870 against the dollar in early trades and has weakened more than 1 per cent since it hit a one-month high above 1.30 last week after Bank of England governor Mark Carney said that a rise in rates was likely to be needed as the economy came close to running at full capacity.

RBC recommends a short sterling trade against the US dollar at 1.2895 targeting a level of 1.2635.

Optimism about the business environment among Britain’s financial services firms declined in the second quarter of this year, according to a survey published on Tuesday.