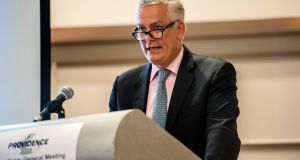 Oil exploration company Providence Resources has been granted a 2-year extension to the term of a licence in the North Celtic sea basin roughly 50km off the south coast of Ireland.

The Barryroe licence is operated by a wholly-owned subsidiary of Providence in conjunction with another firm, Landsdowne Celtic Sea.

In addition to the extension of the first phase, the overall term of the licence has been extended to July 2021 by the Minister of State for Natural Resources and Digital Development, Sean Kyne.

“We are very pleased to be granted these extensions to the Barryroe licence, which provides additional security of tenure whilst we continue the farm-out process,”said Tony O’Reilly, Providence chief executive.

“ The Barryroe partners are in dialogue with a number of parties regarding advancing the appraisal of Barryroe through to first oil.

“The extension work programme includes evaluating the deeper exploration potential of the licence, which offers exciting upside, over and above the substantial resources already identified in Barryroe.”