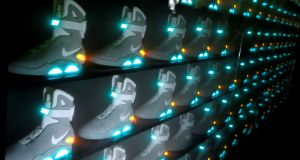 Nike shares rose as much as 9.4 per cent to a three-month high, after the world’s largest footwear maker said it would launch a pilot program with Amazon.com to sell a limited product assortment on its website. Photograph: Danny Moloshok/Reuters

as investors remained rattled by hawkish remarks from central bankers earlier this week.

it was a quiet day.

Building materials giant and index heavyweight, CRH, fell 1.17 per cent to €30.975. More than 1.69 million of its equities sold in Dublin. Dealers said that sentiment was generally poor towards its industry, with a number of European peers also falling. However, insulation specialist, Kingspan, bucked the trend, gaining 1.37 per cent to close at €30.055.

Low-cost airline Ryanair closed 0.64 per cent up €17.96. Traders noted it rose as much as 1 per cent during the day as investors bought into the carrier after its stock fell earlier in the week. About 2.25 million of its shares were traded in Dublin.

Agri services business Origin Enterprises slid 1.95 per cent to end the day at €6.383.

Resource stocks dragged down the blue-chip FTSE 100 while mid-caps, which are more domestically exposed, felt the brunt of investors turning against the UK economy and suffered their worst month since the Brexit vote.

Oil majors Royal Dutch Shell and BP were down 1.5 per cent and 1.6 per cent respectively, while miner Glencore also dropped 1.1 per cent. Another Irish-based company, Tullow Oil, whose main listing is in London, shed 2.02 per cent to close at 150.7 pence.

Retailers Marks & Spencer and Next were also prominent fallers. M&S fell 2.1 per cent to 333.3p while its rival was down 3 percent at 3,856p. A survey showed British consumer confidence hit its lowest since last July, immediately after the country voted to leave the EU.

Shares in newspaper publisher, Trinity Mirror, rose 3.3p to 98.3p as the firm announced it had secured a five-year print and distribution deal for the Guardian and Observer newspapers from early 2018.

Chemical giant Bayer fell 4.15 per cent after saying it plans to cut its sales and profit forecasts for this year because of unexpectedly high stockpiling in Brazil of its crop-protection products.

ended a volatile week on a modestly high note, boosted by Nike’s well-received quarterly report, with the S&P 500 tallying its best first half of the year since 2013. Nike shares rose 11 percent after the world’s largest footwear maker reported a quarterly profit that topped estimates and said it would launch a pilot online sales program with Amazon. com.

1 Michael Smurfit: ‘I asked Trump to invite me to the White House for my 80th birthday’
2 ‘The recovery needs to be a full-scale economic renewal’
3 Ryanair expects air fares to fall when flights take off again
4 Minister calls for EU to act against tobacco firms ‘undermining’ menthol ban
5 ‘I’m so lucky to be in the Caribbean – a million miles from Derry Girls’
6 Lioncor gets planning permission for ‘house of Europe’ project
7 Small businesses are cannon fodder in zealous anti-virus experiment
8 Consumers hesitant about travel as Covid-19 restrictions ease
9 Household savings soar as consumers stop spending
10 Tobacco makers still trying to make a mint from menthol market
Real news has value SUBSCRIBE