Caveat: Where was the State response to threats to Quinn Industrial Holdings executives? 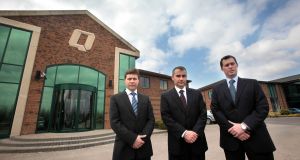 Quinn Industrial Holdings senior executives Kevin Lunney, Liam McCafferty and Dara O’Reilly, who have been subjected to threats and intimidation over the past three years. Photograph: Brenda Fitzsimons

Imagine, for a moment, that a US multinational employing hundreds of people in Ireland was the subject of a multi-year campaign of threats, intimidation and violence. It could be a Silicon Valley web giant, perhaps, or a blue-chip US pharma company, under siege from Irish criminals.

How do you think the State would react?

Imagine that a lorry was driven into that company’s headquarters and set alight. Then, imagine that this sort of thing ends up happening so often that it stops being newsworthy.

Or picture this scene: the young children of a director of the multinational return home one December night from a trip to see Santa. They’re excited and happy. They get out of the car, run towards the house and find a severed pig’s head outside. The same evening, threatening graffiti is scrawled on a local mountainside. A can of petrol and matches lie nearby.

Winter turns into spring. Huge signs are erected all across the region in which the multinational operates – at roundabouts, on farm gates and roadsides. The signs have pictures of the company’s executives, calling them traitors and issuing threats. Staff at an associated company open a package one March morning and it contains three rifle bullets, a funeral wreath, and a note warning workers they may be shot.

Vehicles are set alight in the driveways of foreign executives working for the company in Ireland. Some are told to their face that their “blood will be on the walls”. One threatening sign calls for an associated factory to be burned down. Some of the language reads like a dog whistle to paramilitaries, the barbaric cavemen of Ireland’s dark past.

The multinational’s equipment is destroyed time and time again. Sand is poured into engines, into machinery, grinding the components into failure, hitting production. Buses and trucks are parked on company property and burned. Before long, the burned-out vehicles are replaced by burned-out buildings. A factory owned by the relative of one executive is torched.

The threats eventually turn to physical violence. Family members of the foreign investor’s executives are abused and assaulted. One night, the wife and two young children of one company executive are lucky to escape with their lives when a car beneath their bedroom window is set on fire. The company pleads for protection.

Inevitably, the intimidators, the criminals, the bullies: they up the ante. Why wouldn’t they? Nobody has stood in their way before now. Lots of people suspect who may be behind the campaign. But they haven’t been arrested. They haven’t been stopped.

Two of the multinational’s executives stop at a service station. A man throws boiling water into the face of one of them, and uses his fist to break the other’s nose. He knocks him to the ground. Again and again, he rains blows down upon his victim. He stops only when others drag him away.

Then, one evening, one of the multinational’s most senior managers drives home from work. As he reaches his house down on an isolated rural lane, his car is rammed by a vehicle full of assailants. They smash the windows, drag him out and set his car alight.

His family doesn’t know if he has been abducted or if he is in still in his car, which is engulfed in flames on the roadway near his home. Hours later, he is found dumped on a roadside in a neighbouring county, his leg broken, his body and face battered, cut and bloodied.

If even a fraction of this litany of outrages had been perpetrated against a foreign investor or an IDA Ireland client company, you could bet your bottom, tax-avoiding dollar that the full might of the State would have been long since marshalled in that company’s defence.

There would have been Cabinet meetings to build a co-ordinated State response. If it was a US tech company in Dublin, half the Garda would be stationed by now in Silicon Docks. There would be hourly armed patrols down Grand Canal Street. Suspects would be roused from their beds, put under constant surveillance, harassed and sat upon.

Most of you have guessed by this point that this nightmare has, of course, not been endured by a foreign multinational. But it has been allowed to happen to Quinn Industrial Holdings (QIH), an Irish manufacturing company that operates on the Cavan/Fermanagh border.

Its operations director, Kevin Lunney, is currently lying in a hospital bed after being abducted and savagely beaten. Who knows when he, his wife and their six children will feel safe again.

As news of his horrific ordeal emerged this week, the airwaves hummed with politicians and Ministers expressing their shock and abhorrence. Establishment tea and sympathy.

QIH has been warning for more than a year that something like this, or worse, was bound to happen. Where was the co-ordinated State response, the task force, the fury in Government buildings? Not a single suspect has been arrested for any of the incidents described.

We must ask ourselves why this desperate situation has been allowed to develop. Is it because QIH is not a “sexy” foreign direct investor? Because it isn’t a Silicon Valley upstart with an algorithm, a fetish for tax avoidance and trendy management who makes Ministers look good in photo-shoots?

Or perhaps it is because all of this violence and obscenity took place in the perennially neglected Border region, far from the glass and steel at the heart of Dublin’s tiger economy. Isn’t that the sort of thing they do “up there” anyway – sending bullets in the post, torching houses and breaking each other’s limbs?

It says something about the rest of us that this has been allowed to happen, whatever the reasons might be. Surely now it must be stopped.

– As Christine Lagarde’s appointment as the new president of the European Central Bank (ECB) was voted through the European Parliament in Brussels this week, a subtle press release from Frances Fitzgerald, the former minister for justice and now an MEP, flew under the radar.

Fitzgerald, who has long campaigned for greater gender diversity in public life, welcomed Lagarde’s appointment as “huge progress for women”. But with the congratulations out of the way, Fitzgerald then appeared to kick the ECB, as an institution, where it hurts.

She said the ECB needs to “repair” its relationship with Irish people, which appears to suggest that she believes the institution is to blame for a breakdown in that relationship.

“Irish citizens went through many years of enormous hardship during the crisis – experiencing tax increases, unemployment problems and cuts to services and wages,” she said, implying some of was the fault of the ECB as a member of the bailout troika.

“If the ECB is to regain trust and repair the relationship with Irish people, it needs to listen to the concerns of citizens and clearly explain the reasons for any decisions it will make.”

You’d think that Fitzgerald hadn’t been a prominent member of the government that implemented the austerity measures designed by the troika.