It is a fact that if people do less and use less, then GDP will fall 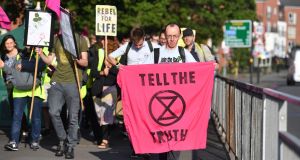 International financial markets believe recession may be coming. Germany’s economy is contracting, a no-deal Brexit could soon drag Ireland under, and Mother Nature is having a toga party round her place later on to celebrate.

Recessions are good for the environment. The numbers prove it. During the economic slump between 2007 and 2013, US carbon emissions fell 11 per cent. A minor portion was due to a shift away from coal. But the bulk was due to lower consumption, according to a 2015 paper in peer-reviewed science journal, Nature Communications.

Irish emissions growth also stalled during our recession. But while economic slumps may be good for the environment, they are bad for pretty much everything else. Most understand this instinctively. For those who don’t, think back to how miserable Ireland was between 2008 and 2013. The unemployment. The fear. Vulnerable people mired in debt. Cuts to public services, wages and budgets.

Irish suicide rates rose 15 per cent at the height of the recession, according to research from UCC academic Ella Arensman. She has also pointed out that the National Self Harm Registry recorded a 30 per cent rise in incident rates. Recession, defined as two straight quarterly contractions in Gross Domestic Product (GDP – the value of the economy), makes people poorer, sadder and less healthy. That is incontrovertible fact.

Economic growth, defined as increasing GDP, lifts people out of poverty, funds more public services, and makes us healthier and, for the most part, happier. Look at international rankings, such as the United Nations World Happiness Index. You will see most top-ranked countries (Ireland is 16th) are high-GDP countries. There is a clear correlation, although not necessarily causation.

GDP is terrible, however, at measuring the damage that economic activity does to the environment. Consequently, as a totem of measurement, GDP growth is slowly going out of fashion. It is the boot-cut jeans of economics – still loved by many ageing men who believe the 1990s were peak civilisation, but increasingly disparaged by the young, the hip, the woke, and those who seem to paint their jeans on and hate socks.

Many on-message politicians, such as New Zealand’s prime minister Jacinda Ardern, want to move away from using GDP growth as the main measure of society’s progress. So, too, does the Green Party, which is odds on to be a part of, or a support to, the next Irish government. The Greens are opposed to “the policy of successive governments to pursue absolute economic growth” at the expense of the environment.

But what does that idea actually mean in practice? If the Greens don’t fancy growth, then what do they fancy instead?

A debate that has been bubbling away in academic circles for years has now broken into the mainstream: an ecologically-inspired push towards economic “degrowth”. Some of its proponents simply want a more rounded approach than looking for GDP growth. But increasing prominence is afforded to ultras who want to deliberately restrain economic growth to fight climate change, and even reverse it.

Degrowth is not the same as recession, its fans will argue. It is not less of the same. It is more of something different, something better. They will say it is simply borne of a desire to find a different way of measuring progress, taking into account factors like the environment. But that isn’t the whole truth, and degrowth fetishists know it.

If George Orwell had chiselled a monument to Oceana Newspeak out of grey industrial concrete, the chances are it would be D-E-G-R-O-W-T-H in 10ft high letters. To say that degrowth is just a new way of approaching things is to wilfully mislead people. It can only mean economic contraction, and all that comes with it.

If the end game is to reduce the impact of economic activity on carbon emissions, and hence its impact on the environment, then by definition, you must want less economic activity. It doesn’t matter what metrics you use to measure it, whether it is GDP or anything else. Changing the scorecard does not change the facts on the ground.

People who champion degrowth may well be correct to do so. I am not a scientist. As I have no expertise to challenge it, I must accept the prevailing scientific wisdom. It says we have a limited number of years, perhaps 12 or so, to limit global warming sufficiently to eliminate the risk – and it is a risk, not a certainty – that climate change will cause irreversible, terrible damage to the planet.

I also increasingly believe that the great white hope that economic growth can be decoupled from emissions may be a fallacy, the biggest attempt to have cake and eat it in history.

But if you are going to champion degrowth, shouldn’t you look people in the eye and tell them what it really means?

And when GDP falls, we all know what happens. Less people are lifted out of poverty, some lose their jobs, some lose their homes, their health may be damaged, many are less happy, and a small number many eventually succumb to the pressure.

That is the real inconvenient truth for degrowth fans. They shouldn’t gloss over it.

Food delivery app Deliveroo has made a submission to the Government asking for a change to the law to allow it to offer benefits such as sick pay to its “self employed” riders.

The company, whose business model is built upon dampening the fixed costs of food delivery, said the proposed legal change would give its riders “more security, as well as giving greater certainty to those who work in the on-demand economy”.

But if the security and welfare of its riders is its over-rising objective, surely Deliveroo could simply give them staff jobs but allow them to work as flexibly as they want?

Ornua’s Purchase Price Index (PPI) is a monthly calculation of market returns for dairy – essentially, it tracks the undulating fortunes of dairy farmers. Quain noted how smaller processors, such as Lakelands or some processors in west Cork, seem to be able to stay on target with PPI, but not the big beasts such as Glanbia or Kerry.

The current PPI stands at 30.9cpl (cents per litre), the ICMSA says, with the big processors hovering about 1.4cpl below this mark.

He concluded that some of the less-storied processors seem better able to handle the current market challenges than the “darlings of the business pages”. Presumably, someone brought him a saucer of the good stuff after he had let loose.