Backed by hedge funds and armed with lawyers, Irish-backed firm P&ID is running an insurgent campaign for payment 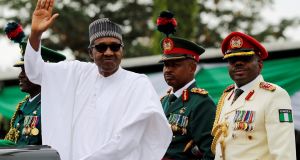 Nigeria’s president Muhammadu Buhari has ordered a criminal investigation into the awarding of the 2010 contract. Photograph: Afolabi Sotunde/Reuters

Down Stephen’s Lane in the south of Dublin city centre, near what used to be Dobbins bistro, an empire sits behind a set of wrought iron gates. It doesn’t look like much from the outside: a small building with bars on the windows and doors. But it is at the epicentre of a $9.6 billion (€8.6 billion) battle with the Nigerian government.

P&ID won the largest arbitration award in history against Nigeria over a failed 2010 gas deal with its government. Earlier this month, a British court confirmed the award for profits lost on the contract to build a refinery. Nigeria had signed up to provide the gas.

The scheme never happened and Quinn and Cahill’s company brought the case, as per their contract, to a London arbitration panel, which awarded them more than 20 years of projected returns. The award accrues more than $1 million per day in interest, and has sparked a political scandal in Nigeria, threatening a fifth of its foreign reserves.

Even with a UK judgment, how does a company linked to another company down a lane in Dublin collect more than $9 billion from an angry foreign state? It can only do so with huge institutional, legal and financial backing. Even then, the truth is that it will be difficult. But even a slice of such a monstrous cake would be a feast.

P&ID, backed by hedge funds and armed to the teeth with lawyers and lobbyists, is now running an insurgent campaign for payment.

From a public relations and legal point of view, it has the Nigerians on the run. The African state’s leaders look to be in total disarray.

P&ID’s slick campaign is an exemplar of the financial cottage industry that has built up around squeezing debts from sovereign states.

Quinn and Cahill are the sort of influential Irish businesspeople who remained largely unknown outside their immediate circles. Quinn, a close associate of the late politician Liam Lawlor and from a working class Dublin city suburb, passed away in 2015 and never got to savour full victory against Nigeria. According to legal documents he submitted to the London arbitration hearing, he first started doing business there in the 1980s in the commodities sector, after he quit the entertainment business. He always kept close links with Albert Reynolds, whom he knew from his time putting on shows in dance halls.

Quinn was once charged in Nigeria with allegedly being part of a Russian spy ring, although those charges were later dropped. Together with Cahill, with whom he appears to have hooked up in the 1980s in Industrial Consultants, he worked on deals in Nigeria doing everything from refurbishing tanks to building port infrastructure.

Many of their ventures can be traced back ultimately to the house on Stephen’s Lane.

Cahill, who is 71 and occasionally speaks on behalf of P&ID, maintained an even lower profile than Quinn. He works as a business consultant and adviser, and once tried to broker a deal to finance an attempted takeover of Switzers department store, now Brown Thomas, in Dublin.

Cahill helped to set up the Nigerian Irish Friendship Association in 1989. With Quinn, he became involved in all sorts of business ventures, including Kent Steel, which in the 1990s tried to develop a new steel-making technique using Russian scientists at an ESB plant in Roscommon.

The two men also once attempted to broker a deal to allow a Nigerian state oil company take over the Whitegate/Whiddy facility in Cork. In Nigeria, they were partners on scores of industrial projects.

After almost 30 years of doing business there, the 2010 gas refinery deal was to have been Quinn’s “swan song” in the country, according to documents from P&ID. But the deal went sour, the regime changed, and the row went legal. It ended up in enforcement proceedings in the UK courts, where P&ID prevailed, and in a US court, where the case is ongoing.

Bloomberg has reported that company documents in the British Virgin Islands, where P&ID is located, show that a US hedge fund, VR Capital, has taken a 25 per cent stake in the business. It is likely that VR’s investment is funding P&ID’s campaign.

The US Senate lobbying register shows that P&ID has hired a phalanx of law firms and professional lobbyists to help it in an asymmetric fight against the Nigerian state. These include Black Diamond Strategies, whose staff includes former Trump strategist Doug Davenport, sovereign debt fight-specialist DCI Group and Kobre & Kim, the law firm that represents it in court.

P&ID has set up slick websites, social media accounts and document resource centres for media that have left its opponent’s paltry PR efforts in the dust.

Nigeria says it will appeal the award, and Cahill and the late Mick Quinn have been criticised heavily in the local press. President Muhammadu Buhari has ordered a criminal investigation into the awarding of the 2010 contract, and the country is trying to reassure investors that it is not about to lose 2.5 per cent of its GDP to a gas investor.

When developing sovereign states in financial rows come up against determined foes bankrolled by hedge funds, it isn’t always apparent who is David and who is Goliath.

– A rummage through the highly-detailed US Senate lobbying register shows several other Irish-linked entities that have hired advocates to advance their interests in Washington.

Building materials group, CRH, the largest company on the Irish Stock Exchange, has so far paid $60,000 (€54,000) this year to Corley Associates to lobby congress to “shore up” finding for new highways. It has also hired Ice Miller Strategies and Gaylord Hughey, Trump’s top fundraiser in Texas, to lobby for it on various issues.

Finishing out CRH’s roster of Washington lobbyists on infrastructure issues is Van Scoyoc Associates. CRH spent well over $160,000 (€145,000) lobbying Washington on various issues in the six months to the end of June.

Denis O’Brien’s Caribbean telco, Digicel has been lobbying US aid authorities and the state department over issues relating to industry infrastructure in Haiti. The company has hired renowned political intelligence group, AGC Analytics.

Food group Glanbia, which has extensive interests in the US, hired top law firm Miller & Chevalier to lobby for it on the regulation of dietary supplements. The company appears to have been working with the listed Irish group for more than a decade.

Fyffes has hired the lobbying firm run by Ron Sorini, who served in the administration of George Bush snr, to work for it on the Hill. It conducted no lobbying activity for Fyffes in the first quarter of 2019, but still picked up fees of $40,000 (€36,000), according to a filing.

And it’s not just private sector clients. Shannon Airport Authority has also been a prolific client of Washington lobbyists on aviation matters, although it hasn’t made any filings for 2019 so far.