Caveat: reaction to pub shutting down proves there is emotion in bars but little in business 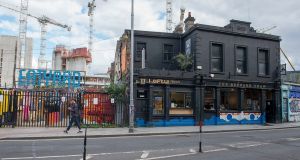 The Bernard Shaw on South Richmond Street, Dublin. The pub only came into being because of one economic cycle, and it will go out because of another. Photograph: Dave Meehan

One of the endearing things about pubs in Ireland (as opposed to Irish pubs) is that customers of the best ones forge emotional bonds with the place.

It is partly why branded pub chains never took off here: how can you be expected to forge an emotional bond with some bland stranger, some blow-in mercenary?

Your favourite pub is more like a friend, and it never matters that your friend is not perfect. You always forgive your friends their faults. You learn to cherish them in fact, because your friend accepts all of yours.

What, the locks are broken in all the cubicles, and there are fag burns on the toilet seats? If it was a random restaurant you’d curse the place for its squalor. But if it’s your favourite pub: relax, it’s just part of the character of the place.

You can always put your foot up against the back of the door if you need privacy? And the graffiti will give you something witty to read while you’re busy.

Your choice of friend says something about you; it is a projection of your values. Perhaps frequenting your friendly local is your way of demonstrating your regard for your neighbours, because you know they will be there too and you are happy to meet up with them and show interest in their everyday lives.

Or maybe you are a sports fan, and your favourite pub will always be the spot where your heart soared when Houghton put the ball in the English net, and where it broke when Schillaci put it in ours. You and all your other friends. You experienced those moments there, together, and the pub was a part of the gang.

Or perhaps you live in Dublin and you value the city’s heritage of literature and culture, the more dog-eared the better. That’s why you drink in Mulligan’s on Poolbeg Street, or Kehoe’s on Anne Street, or the Long Hall on South Great George’s Street, with its old paintings and bockety floor and curious, stout-fuelled aroma.

For many younger city dwellers who are left-leaning politically and self-identify as progressive, and who place value on conspicuous regard for creativity and urban art, the Bernard Shaw on South Richmond Street has been a firm friend.

When it was announced this week that the operators of the pub will be forced to close it when its lease is up at the end of October, two different camps emerged on social media, the home of outsized, polarised views.

The first camp let out a primal scream, a font of fury as if the Government had banned art itself, or sold it to a hedge fund – a culture vulture – in return for corporate bonds and a few blue-chip stocks.

The second camp looked at the first shower like they were crazy, then rolled their eyes and said: “It’s just a pub.”

This is true. But let’s remember: your favourite pub is supposed to be more than just a pub. It is your friend, you’ve got a bond and it feeds into your identity.

If one of your real-life friends said that he or she will leave forever in a few weeks you might get a tad emotional over it or even go a bit over the top.

There is rarely much emotion in business decisions, however, even if a pub is involved. The truth is that the Bernard Shaw only came into being because of one economic cycle, and it will go out because of another.

When publican Trevor O’Shea, who runs the Bodytonic group, took on the Shaw in 2006 on a one-year lease the pub was an anachronism, an old boozer surrounded by a derelict site in the middle of a property boom. Its days looked numbered. Then opportunity came knocking.

O’Shea was only supposed to keep the seat warm until the site was ready for redevelopment by its owner, The Richmond Partnership, owned by the family of Ray Kearns, the founder of the Institute of Education school.

But the backside soon fell out of the property market in 2007, and O’Shea stayed on to create one of the most unique drinking and eating dens in the city. The property market has since come full circle, however, and the Kearns family appear to have plans for the site once more, which are thought to include a hotel.

Records in the Land Registry show the ownership of the site upon which most of the Shaw sits has been shifted into a company called Finchdean Investments, which company records show is controlled by two generations of the Kearns family. It has yet to submit a planning application.

It may seem grubby to some, but that slice of the city around the bottom of Richmond Street is prime property, and it was always going to be next on the redevelopment carousel. St Stephen’s Green, the city’s commercial heartbeat, is only 800m away.

It is believed that Bodytonic made an unsuccessful attempt to buy the pub from the Kearns family, which would surely have set the group back many millions of euro.

But perhaps Bodytonic has dodged a bullet. The market for pubs is probably nearing, or just past, its peak. The average transaction value of Dublin pubs sold last year rose by about 65 per cent to almost €1.7 million, according to data from property agents CBRE, but the volume of transactions was down.

In 2019, bar sales – the takings of pubs, as opposed to property deals – fell by between 4 and 5 per cent per quarter by volume, State figures show. If consumer spending dips – and some tourism is at risk already – pubs will feel the pinch.

Like business cycles and friends, some pubs just come and go.

If the wealthiest inhabit a world of haves and have yachts, Denis O’Brien has plenty. He will have been concerned this week, however, after his €70 million superyacht Nero toppled over in a dry dock in Genoa in Italy. That is not the sort of listing that the Digicel founder had in mind.

Pictures published by Liguria Nautica, an Italian marine industry publication, show the 90 metre, Caymans-registered Nero rolled onto her port side while in the dock, where she was due for maintenance.

The report says that five crew members were injured, but nothing more than a few cuts and bruises, thankfully.

Nero should be upright and back out on the high seas soon enough. Which is a good thing for O’Brien. It you want to rent the yacht from him it could cost close to €500,000 for a week.

Accounts recently filed for the Sporting Emporium, the Dublin city centre casino owned by Dermot Desmond, show it made a profit last year of €134,000, but it still has accumulated losses of some €3.3 million.

The odds clearly suggest that the businessman will continue to support the company, however. The accounts show that the casino owes other Desmond companies €4.3 million. This was down from €5.5 million a year earlier, suggesting Desmond was repaid €1.2 million over the year.