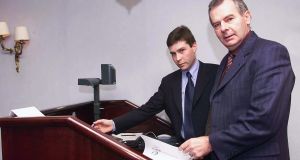 The attack on Quinn Group executive Kevin Lunney is the latest in a spate of what the company has described as “increasingly serious criminal attacks”.

As recently as March, Mr Lunney, who is currently chief operating officer of Quinn Industrial Holdings having previously worked for the business controlled by Seán Quinn, was granted an interim injunction after being subjected to a “vicious attack”.

A Belfast High Court hearing earlier in the year heard from Mr Lunney’s lawyer that he was targeted in February as part of a wider campaign involving arson attacks, firebombs and online harassment.

He’s not unique as a director in Co Fermanagh-based Quinn Industrial Holdings – a company made up of elements of the old business empire founded by Seán Quinn. Those executives have allegedly been subject to repeated attacks, something Mr Quinn has publicly condemned on a number of occasions. A Garda criminal investigation into the alleged February attack is ongoing.

This isn’t necessarily a new phenomenon in Lunney’s life. In 2016, he, alongside other executives, faced a death threat. A sign erected near Quinn Industrial Holdings in Derrylin read: “Remove the UDA + UVF off our mountain, or face the gun.”

On Wednesday, following the attack on Mr Lunney, the company issued a strong statement, denouncing the attacks, but also pondering why arrests have yet to be made.

“We have previously warned of the inevitability of serious injury and loss of life arising from these sustained and increasingly serious criminal attacks. We find it inexplicable that not a single arrest has been made north or south despite dozens of incidents. We are now calling for the police authorities north and south to act quickly and decisively to prevent an inevitable loss of life by bringing those responsible to justice.” The statement was issued in the name of Quinn Industrial Holdings chairman Adrian Barden.

The Tuesday attack appears to be a significant escalation in the violence with Mr Lunney’s car found ablaze shortly before 7pm. Some hours later, Mr Lunney was found beaten in Cornafean, Co Cavan, having been left at the side of the road by his attackers. The company said he sustained a broken leg and a range of other severe, but non life threatening, injuries.

Mr Lunney was appointed, alongside Liam McCaffrey and Dara O’Reilly, to run QIH in 2014 after elements of Seán Quinn’s business empire were bought by a group of Irish investors backed by three US hedge funds. The three US bondholder groups that backed the purchase are Brigade, Contrarian and Silver Point. While the company said at the time they believed they had Mr Quinn’s “moral backing” for the deal, Mr Quinn claimed he had been treated in a “deplorable manner”.

Mr Lunney has also been the subject of a Central Bank inquiry into alleged regulatory breaches at Quinn Insurance Limited which collapsed into administration nine years ago before being sold on to Boston-based Liberty Insurance. Mr Lunney, a former Quinn Insurance manager, alongside Mr McCaffrey, argued in a failed High Court action to prevent the inquiry that it was oppressive and unreasonable. They also questioned its constitutionality. The Central Bank's tribunal inquiry is ongoing although no dates have yet been released for the next hearings.