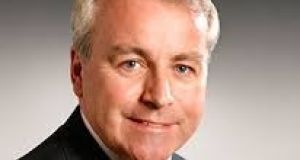 Neil Naughton: ‘Myself and my brother Fergal will work very closely together and we both have the same ambitions for the business, although we have different skillsets.’

Businessman Neil Naughton has been appointed as executive chairman of the Glen Dimplex group of companies founded by his father, Martin Naughton.

Neil Naughton had been the deputy chairman of the electrical goods manufacturer since 2010, but it was not an executive or day-to-day management role.

In recent weeks, however, he joined the business in a full-time executive capacity and has taken over as chairman from Martin McCourt, formerly of Dyson, who had been Glen Dimplex chairman in a non-executive capacity.

The founder’s other son, Fergal Naughton, will continue in his role as chief executive of the globally-focused business, Ireland’s largest privately-owned manufacturing group. Its brands include Morphy Richards, Lec and Faber, and the group remains under the control of the wider Naughton family.

“Myself and my brother Fergal will work very closely together and we both have the same ambitions for the business, although we have different skillsets,” said Mr Naughton.

Martin Naughton, who stepped down as the company’s president in 2016, founded Glen Electric in the early 1970s, before expanding with the purchase of the Dimplex group.

Glen Dimplex Europe, which captures only part of the performance heating and appliances group, had sales of €1.4 billion over an 18-month period to the end of September 2018, according to accounts recently filed.

It took a €21.6 million restructuring charge as a result of “challenging” trading conditions, due in part to Brexit.