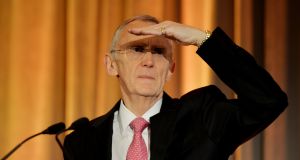 The Tax Appeals Commission said Mr McGann had failed to discharge the burden of proof that Revenue had wrongly assessed the payments as liable for income tax. Photograph: Alan Betson

Businessman Gary McGann has lost an appeal against tax treatment on two payments totalling €2.3 million which he claimed were a gift from Smurfit Kappa’s shareholders during his time as chief executive.

The Tax Appeals Commission ruled that Mr McGann, chairman of Flutter Entertainment (the company formed by the merger of Paddy Power and Betfair) and Arytza, was paid the money in 2011 as a result of his employment with Smurfit Kappa.

The commission said Mr McGann failed to discharge the burden of proof that Revenue had wrongly assessed the payments as liable for income tax by showing they had arisen from a source other than his role as the group’s chief executive.

Commissioner Lorna Gallagher said she was satisfied the payments were for Mr McGann’s “exceptional services” which had added $350 million in value for the group’s shareholders.

“It is not possible to separate [Mr McGann’s] individual excellence from his role as CEO in circumstances where the means of demonstrating his excellence was by being CEO, by acting as CEO and by delivering exemplary results as CEO,” said Ms Gallagher.

She said it was “fundamentally incorrect” for Mr McGann to argue that section 112 of the Tax Consolidation Act, which taxes emoluments arising from employment, did not apply to the payment.

“One simply cannot separate the success from the employment and characterise it as a personal quality separate to the employment,” said Ms Gallagher.“Irish jurisprudence which has tested and measured the scope of section 112 and its equivalents over the past 100 years supports no such proposition.”

The commission heard that Mr McGann had paid €596,350 in September 2011 in capital acquisitions tax but that Revenue subsequently assessed the payments as liable for income tax.

Mr McGann (69) is an accountant by profession. He claimed the payment was not subject to income tax as it was made in respect of his personal qualities and was for “gratitude, appreciation, admiration and friendship”.But Revenue claimed the money was paid in recognition of Mr McGann’s significant contribution to the successful reflotation of Smurfit Kappa.

In evidence, Mr McGann said he was informed after the group had relisted on the Dublin and London stock exchanges in 2007 that he would be given two payments totalling €2.3 million as a gift. These would be paid after the shareholders’ interest in the group was sold.

The payment was calculated at twice Mr McGann’s salary, the commission heard.

Evidence was given that Mr McGann earned an annual average of €4 million in salary and other remuneration during the period Smurfit Kappa was a private company. Mr McGann acknowledged that he always felt he was “extremely well paid and well rewarded”.

The businessman admitted he was “amazed” that the €2.3 million payment was recorded as “compensation of key management personnel” in Smurfit Kappa’s 2007 annual report when he understood it was a gift.

The commission ruled that the €2.3 million was not paid to Mr McGann on grounds of compassion, altruism, ill-health, indigence or other similar reasons.

Ms Gallagher noted the payment was not a singular award to Mr McGann but one of four payments totalling €5.8 million made to the entire senior management team at Smurfit Kappa.

“This undermines considerably the submission that the payments were made for reasons personal to the appellant,” she said.

Ms Gallagher said the payment was made in respect of the “very extensive amount of work” undertaken by Mr McGann in the five-year period prior to the listing of Smurfit Kappa on the Dublin and London stock exchanges in 2007.

The commission heard that he had set up an office during a family holiday to Hawaii in 2005 so he could work on a planned merger.

Mr McGann told the commission he had missed many family events due to work, including the birth of his first grandchild.

Ms Gallagher said the €2.3 million award reflected not just the successful completion of the IPO but also the significant growth of the company between 2002 and 2005 at a time of difficult market conditions.

She said the payment related to Mr McGann’s “extraordinary dedication and effort as opposed to being for that fact that he merely held a position in the company”.

Mr McGann was chief executive of Smurfit Kappa from November 2002 to August 2015.

His first senior role was as chief executive of drinks firm, Gilbeys which he took up in 1991 before moving to a similar role with Aer Lingus in 1994 and subsequently joining the Smurfit group as chief financial officer in 1998.

He was also a director of Anglo Irish Bank from 2004 until its nationalisation in 2009.

The commission noted that Anglo provided Mr McGann with a loan facility of €1.38 million in June 2008 to buy €1.2 million worth of shares in Smurfit Kappa.