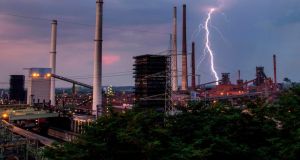 German industrial output unexpectedly fell in July, adding to signs that struggling manufacturers could tip Europe’s biggest economy into a recession in the third quarter and supporting the case for the European Central Bank to take action next week.

Industrial output fell 0.6 per cent on the month, figures released by the statistics office showed, bucking expectations of a rise of 0.3 per cent. The drop was driven by a decline in the production of capital goods.

“A recession in the industrial sector will continue,” Bankhaus Lampe economist Alexander Krüger said. “That firms up the prospects of a technical recession.”

June’s output reading was revised to a fall of 1.1 per cent from a previously reported 1.5 per cent fall.

Germany’s export-reliant economy is suffering from slower global growth and business uncertainty caused by US president Donald Trump’s “America First” trade policies and the UK’s planned, but delayed, exit from the European Union.

German chancellor Angela Merkel said at the start of a visit to Beijing on Friday that the China-US trade war affected the whole world and she hoped it would be resolved soon.

But the weak output data reinforced the case for the ECB to take fresh action at its September 12th policy meeting. The central bank has all but promised a stimulus package at the meeting and market expectations have been growing as Germany slows.

Germany’s gross domestic product contracted 0.1 per cent quarter-on-quarter in the second quarter on weaker exports, with the decrease in foreign sales mainly driven by Britain and below-average demand from China.

A run of weak data since then has fuelled concerns that the economy could tip into recession in the July-September period.

“The nightmare is now unfolding, and it can’t be shaken off,” Thomas Gitzel, economist at VP Bank Group, said after Friday’s data.

With its sales abroad hit by a worsening trade climate, a global economic slowdown and the increasingly chaotic run-up to Brexit, the bulk of Germany’s growth momentum is now being generated domestically – a dependency that leaves it exposed to any weakening of the jobs market.

Goldman Sachs chief financial officer Stephen Scherr said on Thursday that the German economy is in the “early days of a slowdown”.

The government expects economic growth to slow to 0.5 per cent this year from 1.5 per cent in the previous year. This would be the weakest expansion since 2013 when the euro zone struggled amid a sovereign debt crisis. – Reuters