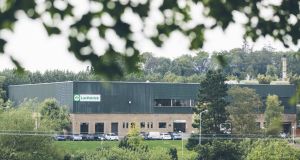 Lakeland Dairies facility, Co Monaghan. The group said on Friday 68 of the 130 jobs in the facility will go, while some staff will be redeployed within the group

Redundancies of about 68 staff will be “necessary” at Lakeland Dairies in Co Monaghan, the company said as it announced a plan to reduce operating costs across the group.

The co-operative society merged with LacPatrick earlier this year to create a business with sales of more than €1 billion a year, making it the second biggest dairy processor in Ireland.

Under a plan announced on Friday evening, the group said 68 of the 130 jobs in the Monaghan facility will have to go, while some staff will be redeployed elsewhere within Lakeland Group.

“It is essential for us to realise efficiencies from within our merged group of processing facilities and to achieve sustainable profitability in the interests of our farm families on a long-term basis for the future,” said Michael Hanley, chief executive of Lakeland Dairies.

Prior to the merger, the Monaghan site, which was originally part of the LacPatrick business, had “significant and recurring losses” and has had “little or no investment in processing capabilities over the years”.

“After careful consideration, the Board has approved this plan for the Monaghan town site which will reduce operating costs while providing for the continuation of strategic units for the business,” Mr Hanley said.

“Arising from this adjustment of operations, it is regrettably the case that a number of redundancies will be required in Monaghan and we will enter into consultation to discuss the roles that will be affected.

“We will also be providing details of any redeployment opportunities available in other parts of the Lakeland Group.”

The Lakeland Group processes more than 1.85 billion litres of milk per year and works with 3,200 farms. Since regulators formally approved the merger earlier this year, the new society has reviewed how best to integrate the group.

“While this development is difficult for everyone concerned, it is necessary to ensure we operate our business in the most efficient manner,” Mr Hanley concluded.

Lakeland agreed to buy its rival last year after financial problems prompted LacPatrick to seek a tie-in with another processor.

Both Lakeland and LacPatrick have suppliers, processing facilities and customers on either side of the Border.