BMW warns it could reduce UK output over hard Brexit 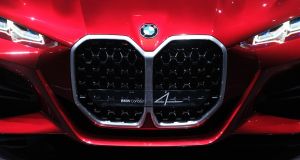 A BMW concept car at the Frankfurt motor show.

BMW would reduce output at its plant in Oxford by eliminating a work shift should the UK opt for a hard Brexit, according to its chief financial officer.

The German carmaker already plans to completely halt production on the October 31st deadline when Britain is expected to leave the European Union, as well as on November 1st, CFO Nicolas Peter said at the Frankfurt motor show. “We’d have to increase prices, and we have to curtail production to react to such a development,” Mr Peter said on BMW’s contingency plans should the UK drop out of the EU without an agreement.

“The plans are in the drawer.” Carmakers have for over a year warned a no-deal Brexit would mean shifting production out of the UK.

Toyota has estimated daily costs running into the millions, and it said last week it would stop production on the day of departure. BMW has set aside €300 million euros to deal with any Brexit-related costs.

BMW is battling trade turmoil on several fronts, including a potential return of tariffs between US and China.

The company is considering whether to produce the X5, one of its best-selling sports utility vehicles, in China to avoid the prolonged spat, according to Peter. The X3 and X2 models are made in China.