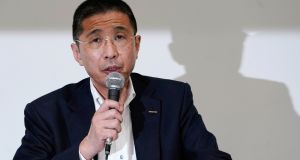 Hiroto Saikawa, president and chief executive officer of Nissan, is to resign. Following a board meeting on Monday, the company said it would install its chief operating officer Yasuhiro Yamuchi as interim chief executive.

Nissan chief executive Hiroto Saikawa will resign next Monday following revelations of excessive payments and a plunge in profits in the wake of the ousting of Carlos Ghosn on allegations of financial misconduct.

Following a board meeting on Monday, the company said it would install its chief operating officer Yasuhiro Yamuchi as interim chief executive until it found a permanent replacement for Mr Saikawa by the end of October.

The change in Nissan’s management came after the company concluded a 10-month internal investigation into the finances of Mr Ghosn, saying alleged misconduct by the former chairman caused financial damages of Y35bn (€296.5 million) to the company.

Mr Ghosn, who was arrested and ousted in November, has denied all charges of financial misconduct.

Nissan’s nomination committee has compiled a list of more than 10 candidates, which include current executives such as Jun Seki, its performance boss, as well as external candidates from Renault and other companies.

The investigation has found that several of its senior executives, including Mr Saikawa, received excess payments as part of an incentive scheme that paid out cash depending on Nissan’s share-price performance.

Although the excess payments were not illegal and Mr Saikawa is not accused of any wrongdoing, the operation of the incentive scheme was described by Mr Saikawa as “different to what it should have been”.

Removing Mr Saikawa from his position clears one of the big barriers to closer co-operation between Nissan and Renault, as relations between him and Renault chief executive Thierry Bolloré have soured.

A change at the top of Nissan may potentially open the door to further talks between Renault and Fiat Chrysler about a future combination, months after the pair called off negotiations over a € 33 billion merger. – Copyright The Financial Times Limited 2019