Picket is first in 12 years for car maker 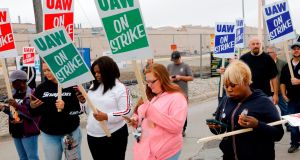 Negotiators for General Motors and the United Auto Workers resumed talks Monday to resolve a strike that shut down the automaker’s highly profitable US operations.

The UAW on Sunday launched the first company-wide strike at GM in 12 years, saying negotiations toward a new national agreement covering about 48,000 hourly workers had hit an impasse.

Workers took to picket lines outside GM factories, waving signs declaring “UAW On Strike.” During the walkout, UAW members will get $250 (€226.60) a week from the union’s strike fund.

The UAW confirmed on Monday that talks had resumed. Lost production could cost GM as much as $40 million to $50 million a day, RBC Capital Markets estimated in a note on Monday. GM could make up the lost production with overtime work after a settlement.

Company and union officials say there are a number of issues to be resolved and that no immediate resolution on Monday is expected.

Mr Trump on Sunday took to Twitter to urge the UAW and GM to “get together and make a deal!” GM spokesman Tony Cervone said the automaker “couldn’t agree more” with Mr Trump’s call.

GM chief executive Mary Barra met with Trump ahead of the strike deadline. Trump has attacked GM for Ms Barra’s decision to stop building small cars at an assembly plant in Lordstown, Ohio. The state is pivotal to Trump’s re-election.

The union wants to stop GM from closing Lordstown and an assembly plant in Detroit. The UAW has said workers deserve higher pay after years of record profits for GM in North America.

GM argues the plant shutdowns are necessary responses to market shifts, and that UAW wages and benefits are expensive compared with competing non-union auto plants in southern U.S. states.

In a statement on Sunday, GM outlined its offer to the union, saying the package included solutions for the Michigan and Ohio assembly plants currently lacking products, $7 billion in US investment and a signing bonus of $8,000 per worker.

A source familiar with GM’s offer said the company could produce a future electric vehicle at the Detroit-Hamtramck plant that now has no future assignment.

GM could also build an electric vehicle battery plant in Lordstown, and go through with the proposed sale of the plant to a group affiliated with electric vehicle start-up Workhorse Group Inc.

A new battery plant could give some UAW workers at Lordstown the chance to remain with GM.

The UAW’s top negotiator at GM said the proposal came just two hours before the strike deadline, and laid blame for the strike on the automaker.

“Had we received this proposal earlier in the process, it may have been possible to reach a tentative agreement and avoid a strike,” UAW vice president Terry Dittes wrote in a letter to GM on Sunday.

GM shares were down nearly 3 per cent in early trade on Monday. – Reuters

How the pandemic deepened the poverty pit 14:16
Travel agents back moves for pre-flight Covid tests 12:32
The wealth of the Irish – how do your assets match up? 12:16
Commission ready to clamp down on sweetheart corporate tax deals 11:01
KBC Ireland fined €18.3m for ‘unconscionable’ tracker scandal role 11:00
Search executive
jobs on irishtimes.com