Carlos Ghosn accuses Japan of ‘repaying me with evil’

The former CEO of Renault-Nissan, Carlos Ghosn, denies that he has fled justice in Japan and says the decision to escape to Lebanon was the most difficult decision of his life. Video: Reuters 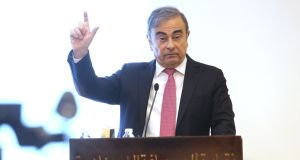 Carlos Ghosn accused Japan of “repaying me with evil” for his decades of service, as he lashed out at the country’s justice system and “unscrupulous, vindictive” figures at Nissan who he claimed concocted a criminal case to destroy him.

The first public remarks by the carmaker’s former chairman since his 2018 arrest in Tokyo came in an hour-long monologue at a Beirut press conference on Wednesday.

He did not describe his dramatic escape from bail in Tokyo to his parents’ native Lebanon, which does not extradite its citizens, in late December. However, he said he had been numb, nervous and anxious until he was reunited with his wife in Beirut.

“It’s not very difficult to come to the conclusion you’re going to die in Japan or you’re going to have to get out,” Mr Ghosn said. “I felt I was a hostage of a country that I have served for 17 years.”

The speech, which sought to address allegations over matters ranging from a lavish party at Versailles to consulting fees that Nissan paid his sister, sketched out what Mr Ghosn called “illegal” collusion between Nissan and the Japanese government to bring him down.

The former head of the Renault-Nissan alliance also rebuked his handpicked – and now ousted – successor Hiroto Saikawa for the Japanese carmaker’s flagging performance and expressed concerns about how the 20-year partnership was being managed without him.

“I think, yes, the alliance can succeed without me,” Mr Ghosn said. But he slammed the notion that it could be managed by “consensus”, saying: “When I look at what happened for the last 13 months, with everything – I’m not reassured about the future of the alliance.”

In a speech delivered with panache but that was occasionally rambling, Mr Ghosn compared his targeting by Japanese prosecutors to Tokyo’s wartime bombing of Pearl Harbour, and dwelt on how Japanese media had presented him as a “cold, greedy dictator”.

He said he had faced pressure from prosecutors to confess to allegations he denies during his 129-day stint in jail. “If you don’t confess, we’re going to go after you and your family”, he said. “There was no end in sight.”

Despite claiming to have “facts, data and evidence”, Mr Ghosn shed little new light on the four charges of financial misconduct he faces in Japan. He also provided no evidence of collusion between Nissan, prosecutors and Japan’s government to bring him down and prevent a full merger between the carmaker and Renault – although he promised to make documents available to reporters that would help clear his name.

He named six former and current Nissan executives, including Mr Saikawa, as being involved in the plot to oust him. Mr Saikawa, who stepped down last year, denies any role in bringing down his former mentor or having any prior knowledge of any financial misconduct.

But Mr Ghosn refused to accuse specific Japanese government officials, saying he did not want to inflame tensions between Beirut and Tokyo.

Japanese government officials have denied any involvement in merger discussions between Nissan and Renault or in the investigation against Mr Ghosn. Nissan said this week it would hold Mr Ghosn accountable for serious misconduct uncovered through “a robust, thorough internal investigation”.

Mr Ghosn defended his efforts to integrate the carmakers, saying he would have protected the autonomy of each. “Unfortunately there was no trust, and some of our Japanese friends thought that the only way to get rid of the influence of Renault on Nissan was to get rid of me,” he claimed.

After the press conference, Masako Mori, Japan’s justice minister, said: “If defendant Ghosn has anything to say, it is my strong hope that he engage in all possible efforts to make his case within Japan’s fair criminal justice proceedings.”