Nissan prepares for Ghosn attacks ahead of press conference 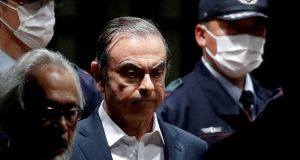 Nissan Motor has strengthened a taskforce of senior officials ahead of an expected onslaught of criticism from former chairman Carlos Ghosn following his dramatic escape from house arrest in Japan, three sources familiar with the matter told Reuters.

Ghosn, who fled Japan to his home in Lebanon last month, has said he will hold a press conference on Wednesday to give his side of the story following his arrest in late 2018 for alleged financial misconduct, which he denies.

He has argued through his lawyers that his arrest was part of a boardroom coup and that top Nissan executives signed off and participated in some of the financial transactions that are now central to the charges against him. Nissan has denied this, and is bracing for more such allegations.

“Now that he has escaped, he can say anything he wants and will keep throwing mud at us until people prove him otherwise,” one company executive told Reuters on condition of anonymity.

“The more sympathy he gets from the media and general public, the stronger his leverage over the Lebanese government to protect him.”

Citing an interview with Ghosn, Fox Business reported that he said he has “actual evidence” and documents to show there was a Japanese government-backed coup to “take him out”.

He plans to identify those he believes responsible, the broadcaster said. In earlier court filings seen by Reuters and statements released by his lawyers in Japan,

Ghosn has claimed that he was unseated to destroy any possibility of a merger between Nissan and Renault, accusing Nissan executives of colluding with Japanese prosecutors and Ministry of Economy, Trade and Industry officials.

Nissan said Ghosn’s flight from Japan would not affect its policy of holding him responsible for “serious misconduct”.

“The company will continue to take appropriate legal action to hold Ghosn accountable for the harm that his misconduct has caused to Nissan,” the automaker said in a statement.

The Nissan taskforce was set up shortly after Ghosn’s arrest to deal with “anything Ghosn-related,” as one source put it – a testament to the significance of a man who forged the company’s alliance with French carmaker Renault and presided over it for almost two decades.

The taskforce is led by chief executive Makoto Uchida and has recently been reinforced with the inclusion of former acting CEO Yasuhiro Yamauchi and former senior executive Hitoshi Kawaguchi, the sources said.

Both former executives were previously close allies of Ghosn and while they stepped down in a recent management shake-up they remain employed at Nissan as advisers.

Ghosn’s flight from Japan presents a fresh distraction for Nissan at a time when Uchida and his newly-installed management are trying to turn around a business hit by plunging profits, collapsing sales in the United States and tensions with Renault.

The sources said most members of Nissan’s executive committee were not receiving information from the taskforce to allow them to focus on day-to-day operations and the turnaround.

The perjury arrest warrant accuses Carole Ghosn of falsely claiming not to know, or to have met, people connected to a company that received payments from Nissan, part of which it subsequently transferred to a firm owned by Ghosn.

Meanwhile, a senior Ministry of Justice official said staff were poring over Lebanese laws to find a way to return Ghosn and that Japan “will do whatever it can” to have him face trial.

Japan’s chief cabinet secretary, Yoshihide Suga, on Tuesday, described Ghosn’s escape to Beirut as “regrettable” and said Tokyo had asked Lebanon for help, although he declined to say what exactly Japan had asked of Lebanon.

“It’s necessary to carefully consider the legal systems of both countries,” he told a news conference. Lebanon does not normally extradite its citizens. – Reuters