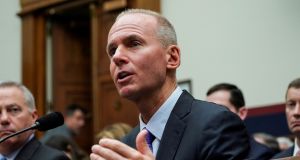 Boeing’s chief executive Dennis Muilenburg: he has resigned, and Boeing made clear he had done so under pressure. Photograph: Sarah Silbiger/Reuters

Boeing has replaced Dennis Muilenburg as its chief executive after he failed to gain control of the crisis which followed the fatal crashes of two of its 737 Max jets.

David Calhoun, a board director who had taken over the chairmanship from Mr Muilenburg in October, will become CEO from mid-January. Lawrence Kellner, a former chief executive of Continental Airlines who is a Boeing director, will replace him as chairman.

Boeing said Mr Muilenburg had resigned, but made clear he had done so under pressure.

“The board of directors decided that a change in leadership was necessary to restore confidence in the company moving forward as it works to repair relationships with regulators, customers and all other stakeholders,” Boeing said in a statement on Monday morning.

The news came days after the largest US exporter sent shockwaves through its supply chain by announcing that it would halt production at its 12,000-strong Renton plant near Seattle.

Regulators reviewing Boeing’s fixes to the Max aircraft have been pushing back their estimates for when the aircraft will be able to fly again, with United saying it will not return to service until June.

Mr Muilenburg, who spent his entire career with Boeing, was widely criticised for a faltering response to the crashes which killed 346 people, and the board indicated that it was aware of the need to improve communication, not least with the Federal Aviation Authority, its domestic regulator.

“Under the company’s new leadership, Boeing will operate with a renewed commitment to full transparency, including effective and proactive communication with the FAA, other global regulators and its customers,” its statement said.

Greg Smith, its chief financial officer, will serve as interim CEO during a brief transition period while Mr Calhoun extricates himself from other commitments. The former GE executive is senior managing director and head of portfolio operations at Blackstone.

Despite lingering concern from some consumers about the safety of the 737 Max design, Mr Calhoun said: “I strongly believe in the future of Boeing and the 737 Max.” – Copyright The Financial Times Limited 2019