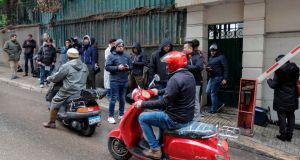 Journalists wait outside a house identified by court documents as belonging to former Nissan chief Carlos Ghosn in a wealthy neighbourhood of the Lebanese capital Beirut on Friday. Photograph: Joseph Eid/AFP

A Turkish private jet operator admitted it helped Carlos Ghosn to stage his daring escape from Japan but blamed a rogue employee for leasing two aircraft to the former Nissan chairman.

MNG Jet, a subsidiary of a major Turkish conglomerate, said it had filed a criminal complaint against its own employees in relation to the “illegal use of its jet charter services in relation to Carlos Ghosn’s escape from Japan”.

The company’s chief executive, Can Sasmaz, said that one of MNG Jet’s employees had admitted falsifying passenger records. “He confirmed that he acted in his individual capacity, without the knowledge or the authorisation of the management of MNG Jet,” Mr Sasmaz said in a statement published on Friday.

Turkey detained seven people on Thursday after it emerged that Mr Ghosn had briefly touched down in Istanbul as he fled a looming trial in Tokyo on charges of financial misconduct – accusations he has consistently denied.

Those taken in for police questioning included a manager at MNG Jet and four pilots, Turkish media reported.

Japanese prosecutors on Thursday raided the house occupied by the former carmaker executive in Tokyo. The raid was the first stage of an investigation that is expected to prove highly embarrassing to Japanese prosecutors, who had been in charge of keeping watch on a man they had repeatedly warned the courts was a flight risk. – Copyright The Financial Times Limited 2020