Ten issues for Carlos Ghosn ahead of his press conference 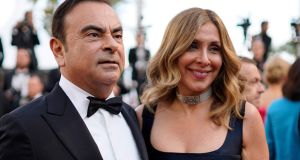 Carlos Ghosn spent 108 days behind bars at the Tokyo Detention Centre, where he was interrogated without a lawyer as prosecutors assembled charges of financial misconduct. Leaks from the justice system and his former company portrayed him running the Renault-Nissan-Mitsubishi Alliance, one of the world’s biggest automotive groups, as a personal fiefdom.

When Mr Ghosn was released on bail in March 2019, he called a press conference to tell his story but was rearrested before he could do so. From jail, he published a video in which he accused Nissan of engaging in a “dirty game” of political conspiracy to bring him down.

On Wednesday, having made his extraordinary escape to Lebanon by taxi, bullet train and private jet on December 29th, Mr Ghosn will hold a press conference at which he has said he will provide proof of a plot against him.

Tokyo prosecutors have charged Mr Ghosn on four counts, including two for understating his pay by more than $80 million (€72 million) over an eight-year period. He is also alleged to have transferred $14.7 million from a Nissan subsidiary account to one held by a Saudi friend’s company. The final charge is that he diverted $5 million from Nissan to companies with ties to him and his family.

Mr Ghosn has denied all charges and allegations made by Nissan that he used company assets for his personal benefit.

Here are 10 issues likely to be raised when he addresses the world’s media:

Mr Ghosn had agreed to pay $1 million to settle fraud charges with the US Securities and Exchange Commission over allegations that he hid more than $140 million of his pay package at Nissan by not declaring deferred compensation that he was set to receive after retirement. Mr Ghosn neither admitted nor denied the charges. Even if the practice were legal, why did he choose to defer part of his salary?

In 20 years running a Japanese company and engaging with Japanese advisers, lawyers and executives, was he ever warned that the justice system could be weaponised against him? If, as Mr Ghosn has said, there is a double standard, who does he believe should have been arrested along with him?

The rescue of Nissan from near-bankruptcy in 1999 and stewardship of the company and its alliance with Renault over nearly two decades have been held up as proof of Mr Ghosn’s management excellence. If he was planning a Renault-Nissan merger, why was he unable to convince the company he had run for so long that it was in its interests?

In 2014, Mr Ghosn and his wife Carole hosted a lavish party at Versailles to celebrate the 15th anniversary of the Renault-Nissan alliance. Why did no senior executives of Nissan and only two top Renault executives attend the €635,000 event? Is there any justification for this lavish spending?

Prosecutors have alleged that Mr Ghosn used Nissan money to invest in a company partly owned by his son and to purchase a luxury yacht by a company owned by Mrs Ghosn using vehicles set up in Lebanon. He has denied the money was transferred for the benefit of him or his family members. But what was the purpose of creating these multiple companies in Lebanon and where did the money go?

Nissan claims it paid $755,000 in consulting fees to Mr Ghosn’s elder sister Claudine between 2003 and 2016, excluding 2012 and 2013. The payments were made for her “contribution to a global donation advisory council”, an organisation Nissan believes did not exist, according to people familiar with the company’s investigation. Why did Nissan pay her a salary?

Did officials from any government assist Mr Ghosn’s escape in any way? Does Japan want him back to stand trial? Or is Japan happy he has spared its justice system long years of international scrutiny?

The elaborate escape from Japan to Lebanon involved two private jets and the help of a team of private security experts, allegedly including a former member of the US army’s elite Green Berets. By breaching bail conditions, Mr Ghosn must also forfeit nearly $14 million he posted to the Tokyo District Court. How did he finance the escape?

Interpol, at Japan’s request, has issued a red notice that raises the possibility he could be arrested in the US, EU member countries or elsewhere. Has he accepted that his life may now be confined to Lebanon? How realistic is it that a court outside Japan hears the case and clears his name? – Copyright The Financial Times Limited 2020