Unclear whether the former carmaker’s chairman has escaped house arrest 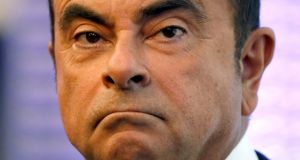 Carlos Ghosn, once celebrated for his turnaround of the ailing car companies, has suffered a dramatic fall from grace.

Carlos Ghosn is no longer under house arrest in Japan and has arrived in his parents’ native Lebanon, according to a source close to the Nissan-Renault chairman’s family and a professional associate.

Mr Ghosn, once celebrated for his turnaround of the ailing car companies, has suffered one of the decade’s most dramatic corporate falls from grace, arrested in Japan in November 2018 under four charges of financial misconduct, which he denies.

He landed at Beirut’s Rafic al-Hariri international airport late on Sunday, according to an associate of Mr Ghosn. Local media reported that he arrived in a private jet, which the Financial Times was unable immediately to confirm.

It is unclear whether the former carmaker’s chairman has escaped house arrest in Japan or whether a deal has been struck for his release. Japanese and Lebanese authorities were not immediately available for comment.

The terms of Mr Ghosn’s detention meant he could leave his flat, followed by police and prosecutors, as well as a private detective, according to FT reporting.

Nissan alleges that Mr Ghosn understated his personal pay, and two filings say he failed to report more than $80 million in deferred compensation.

Mr Ghosn has denied all charges against him from the Japanese prosecutor, and Japan’s Securities and Exchange Surveillance Commission (SESC) in mid-December disputed some findings of a Nissan internal probe.

However, the regulator also fined Nissan $22 million over allegations it understated Mr Ghosn’s pay over a four-year period.

Mr Ghosn holds Lebanese, French and Brazilian citizenship and was long considered one of Lebanon’s most successful expatriate businesspeople. He is a partner in several Lebanese businesses, including a winery, and the Lebanese government advocated on his behalf after his arrest last year.

Japanese prosecutors built part of their case on a laptop obtained in Lebanon from one of Mr Ghosn’s aides, the FT reported in May. – Copyright The Financial Times Limited 2019