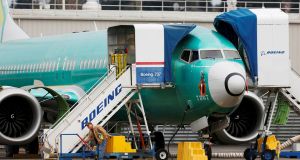 Boeing has confirmed that there will be a further delay to getting the 737 Max back into service. Photograph: Lindsey Wasson/Reuters

Boeing has told customers and suppliers the 737 Max will stay parked on tarmacs until the middle of 2020, extending the grounding months past the one-year mark.

Meanwhile, airlines are scrambling to book time in 737 Max training facilities as far afield as Fiji, Iceland and Panama, operators said, after Boeing recommended pilots be trained in one of the few simulators replicating the latest model.

That means thousands of pilots from more than 54 airlines need to squeeze into about three dozen 737 Max simulators around the world before they can fly the plane.

“Boeing is recommending that all 737 Max pilots undergo training in a 737 Max simulator prior to flying the aircraft in commercial service,” the company said late on Tuesday, the first confirmation of its new policy.

The troubled jet has fallen further behind schedule as Boeing strives to meet milestones required by US aviation regulators. The Max was grounded in March 2019 following two crashes in five months that killed a combined 346 people.

The estimate also accounts for the “rigorous scrutiny that regulatory authorities are rightly applying at every step of their review of the 737 Max’s flight control system” and pilot training requirements, Boeing added.

Whenever the Federal Aviation Administration (FAA) lifts the grounding, it will take about two more months for airlines to add the plane back into their schedules. If the grounding lasts until July 1st, Boeing will miss airlines’ busy summer travel season for the second year in a row.

The estimated 34 737 Max simulators in service, produced separately by CAE Inc and Textron’s simulator and training division TRU, are less than a quarter of the number of older 737 NG simulators certified by US and European regulators.

“I think that what a shortage of simulators will mean is the fleet of Maxs will start flying more slowly than what the airlines would like,” said Gudmundur Orn Gunnarsson, managing director of TRU Flight Training Iceland, a joint venture between Icelandair and Textron’s simulator and training division.

“In the beginning it was said that simulator training would not be needed,” he said. “This changes it totally.”

Airlines may be less eager to accept deliveries during their autumn slowdown, said Bank of America Merrill Lynch analyst Ron Epstein. Purchasing contracts also usually allow airlines to walk away after a year, giving customers the muscle to negotiate discounts from the plane maker.

It also prolongs the cash bleed at Boeing, which Mr Epstein estimates at $1.5 billion per month.

Boeing’s announcement surprised Wall Street. Yet an important question to consider, Mr Epstein said, is whether, under new chief executive David Calhoun, the company “put out a target they knew they can beat”.

The company originally said the grounding would be lifted in December, but last month the FAA publicly disputed that timeline, and the friction with the regulator contributed to the ouster of Boeing chief executive Dennis Muilenburg.

The timetable for the Max’s certification flight has slipped before. FAA chief Steve Dickson said in December that the manufacturer had almost a dozen tasks still to complete. At that time, US officials placed the jet’s likely return to service in February or March.

A key hurdle still to clear is a certification flight, followed by Boeing’s submission of final documentation and training plans to the FAA.

Pushing back the certification date is not linked to new technical difficulties with the jet that became public last week, a person familiar with the matter said. Boeing found a new software glitch during a technical review, it emerged on Friday.

Boeing emphasised in its statement that the FAA would determine when to lift the grounding, but was providing its estimate on the return to service to help stakeholders.

The FAA said in a separate statement that “the agency is following a thorough, deliberate process to verify that all proposed modifications to the Boeing 737 Max meet the highest certification standards”, adding: “We have set no timeframe for when the work will be completed.” – Copyright The Financial Times Limited 2020/Reuters