Car-booking company has 18.6m active users, and doubled its revenues to €1.89bn 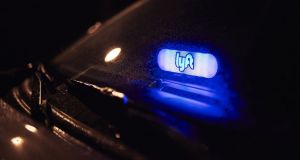 Lyft’s co-founders Logan Green and John Zimmer laid out a vision of the company as a way to reduce traffic and pollution, make cities more liveable and encourage connections among people of different backgrounds. Photograph: Gabby Jones/Bloomberg via Getty Images

The San Francisco-based car-booking app Lyft has kicked off what is expected to be a record-breaking race by tech companies to the public markets this year, posting IPO documents that show sharp rises in revenues and losses.

Lyft, which was founded in 2012 and operates in more than 300 cities in the US and Canada, is hoping investors will be tempted by a near-sixfold increase in its number of active users to 18.6 million in the past 2½ years, and a doubling of revenues in the past year to $2.16 billion.

Costs rose 77 per cent, however, as it spent significantly more on operations, research and marketing, and the company’s net loss rose to $911.3 million, according to its S-1 filing with the Securities and Exchange Commission.

Lyft will go public with a dual-class share structure that gives its founders greater control, and it is also giving some of its 1.9 million drivers an unusual chance to buy shares in the IPO alongside more traditional big institutional investors.

The filing did not include valuation details, such as the size of the offering or anticipated price of shares, including only a place-holder amount. Lyft was last valued at $14.5 billion when it raised $600 million in its last private fundraising in 2018 and has raised about $5 billion in total private capital.

In a letter titled “Our Life’s Work”, Lyft’s co-founders Logan Green and John Zimmer laid out a vision of the company as a way to reduce traffic and pollution, make cities more liveable and encourage connections among people of different backgrounds.

“It’s time to redesign our cities around people, not cars,” the letter begins. “Over the last 50 years, urban development has centred around the automobile, but imagine for a minute what our world could look like if we found a way to take most of these cars off the road.”

The company’s filing marks the beginning of an anticipated wave of high-profile technology listings in 2019 and 2020. A slew of IPOs would set a change of course for a generation of companies that reached huge valuations thanks to deep pools of private capital, and create a new influx of wealth in the San Francisco Bay area.

Waiting in the wings are Lyft’s competitor Uber, online scrapbooking site Pinterest and workplace messaging app Slack, all of which have filed confidential IPO paperwork. Other likely candidates in the next two years include Airbnb, the short-term rental platform, and data analytics company Palantir.

Lyft’s success in beating Uber to the public markets will allow it to claim the crown of becoming the first publicly listed car-booking company, and enable it to set its own benchmarks outside the shadow of its larger rival, from valuation to growth metrics.

The company said its market share rose to 39 per cent in December 2018 from 22 per cent two years before, according to data from Rakuten, the Japanese ecommerce group that is among Lyft’s largest shareholders. Bookings – the total amount it takes in before paying drivers and funding promotions, refunds, and government taxes and fees – were up 76 per cent in 2018 to $8.05 billion.

Uber dwarfs Lyft in the scale of both its business and its losses. Net revenue rose 43 per cent to $11.3 billion on $50 billion in gross bookings last year. Losses, excluding a paper gain from the sale of businesses in Russia and southeast Asia, narrowed to $3.3 billion from $4.5 billion in 2017. It offers rides in dozens of countries and has expanded into food delivery, freight, autonomous cars, flying taxis, bikes and scooters.

Uber has raised more than $24 billion in equity and debt since its founding in 2009 and was last privately valued at $76 billion in August. It is said to be seeking a public valuation of $100 billion or more.

Under Lyft’s dual-class structure, Mr Green, its chief executive, and Mr Zimmer, its president, will hold class B shares that carry 20 votes apiece, giving them voting power that will exceed the less than 10 per cent of shares they collectively own.

Those plans drew criticism on Saturday from the Council of Institutional Investors (CII), which represents asset managers including BlackRock and T Rowe Price.

Most public companies trade a single class of shares, with one vote for each share. But several high-profile tech companies, including Alphabet, Facebook and Snap, have gone public with classes of super-voting rights that cement control with their founders.

Many big investors dislike the structures, which limit their rights as owners.

When Lyft’s plans to list with two classes of shares emerged last month, CII wrote a letter to outside members of the company’s board urging it to adopt a seven-year sunset provision that would phase the extra voting rights out over time. The share structure described in Lyft’s IPO prospectus does not contain such a clause.

“The message the filing sends is that the Lyft founders can govern the company as supreme monarchs in perpetuity and also that they have a ‘let them eat cake’ attitude toward their investors,” Mr Bertsch said.

The company’s other big shareholders, with more than 5 per cent each, are Japan’s Rakuten, General Motors, Fidelity, Andreessen Horowitz and Alphabet.

In an apparent acknowledgment of the role drivers play in making their service possible, Lyft is giving drivers access to shares through a cash bonus that can be used to purchase stock at the IPO price. Technology companies often reward employees with shares, but since Lyft and Uber consider drivers independent contractors, they cannot as private companies grant them stock.

Those who have completed at least 10,000 rides or served on Lyft’s driver advisory council will be awarded $1,000 in cash, with the option to use that money to buy shares. Those who have driven at least 20,000 trips will receive $10,000.

Lyft’s early investors who stand to cash in

The Japanese ecommerce group paid $300 million for a 11.9 per cent stake in Lyft in 2015, making it the company’s largest investor, and holds a board seat. At the time, Rakuten chief executive Hiroshi Mikitani said he saw potential to help Lyft expand to Japan, although the car-booking group has remained focused on North America.

The activist investor made a rare foray into tech start-ups, with a $100 million investment in Lyft in 2015. “I believe that ride-sharing is poised to become a fundamental component of our transportation infrastructure,” he said at the time. A managing director from Icahn Enterprises sits on Lyft’s board.

The US carmaker invested $500 million in Lyft in 2016 with hopes of a long-lasting partnership, from letting Lyft drivers lease GM cars to collaborating on autonomous technology. However, both companies also struck other partnerships – Lyft with Ford and auto supplier Magna, and GM with an acquisition of self-driving start-up Cruise Automation – that put them in direct competition with one another. GM president Dan Ammann stepped down from Lyft’s board last year and has since become CEO of Cruise.

Pensions: Estonia plans to unleash a potential €4.85bn on economy 11:53
Dublin Port accounts for two-thirds of vessel arrivals, half of goods handled 11:14
Tullow shares rally as African oil veteran’s stake nears 10% 10:27
Britain after Brexit will not be alone, but it will be lonelier 10:17
Election 2020: Parties' pledges on housing simply don’t add up 09:45