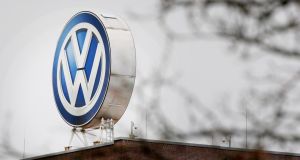 VW has sold more vehicles globally than any other company for four straight years. But its shares have largely trod water over the past three years despite it recovering from the diesel scandal. Photograph: Focke Strangmann

The biggest independent shareholder in Volkswagen has cut its €1 billion stake in the German carmaker almost in half after a decade-long fight over corporate governance and dismay over its diesel scandal.

Norway’s $1 trillion oil fund reduced its holding in VW from 1.32 per cent in 2017 to 0.77 per cent by the end of last year, according to a list of its shareholdings that it released this week. It is the first time the reduction in its stake has been made public.The world’s largest sovereign wealth fund has been the biggest independent voting shareholder at VW for the past six years, according to data from Bloomberg.

The three largest investors – the Porsche-Piech family, the state of Lower Saxony, and Qatar – own almost 90 per cent of the voting shares and all have board seats. Yngve Slyngstad, the fund’s chief executive, declined to comment when asked by the Financial Times about the reasons for the move in line with its policy of not normally commenting on individual investments.

But so serious is the dispute between the fund and VW that the investor has several times publicly expressed its frustration over corporate governance at the carmaker. Only one of 20 directors on VW’s supervisory board is independent of the company and its shareholders. The fund also is one of the investors suing VW over its diesel emissions scandal.

It first criticised VW publicly a decade ago in one of the few letters the fund has ever published. It complained that a plan for the carmaker to take over Porsche “leave[S] the impression of being designed to suit the needs of the Porsche controlling families at the expense of Volkswagen and its non-controlling owners”. In February 2016, the oil fund said VW had made zero progress on improving its corporate governance over the previous decade – unlike nearly all other companies it had contacted on the issue. Asked by the FT if it showed VW was taking the fund for fools, Mr Slyngstad replied: “They are not listening clearly.”

Institutional Shareholder Services has awarded VW its worst-possible corporate governance rating the past three years and in 2018 advised shareholders to vote against approvals of all management and supervisory board members. ISS said supporting them would amount to “a tacit vote of confidence in the company’s management and policies”. VW declined to comment.

The carmaker has sold more vehicles globally than any other company for four straight years. But its shares have largely trod water over the past three years despite it recovering from the diesel scandal and some analysts touting its ability to boost profit margins substantially.

Max Warburton, an analyst at Bernstein, recently wrote: “Investor enthusiasm for VW seems limited...VW has a relationship problem with the capital markets.” Norway’s oil fund also revealed that it had almost doubled its stake in Danske Bank, which suffered a halving of its share price last year after it was hit by a € 200bn money-laundering scandal.

Mr Slyngstad again declined to comment on the move to up the fund’s stake in Danske from 1.88 per cent to 3 per cent over the course of last year. He added that the fund was “following the development closely” as the number of money-laundering claims against Nordic banks increases. – Copyright The Financial Times Limited 2019