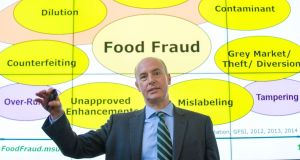 Food companies need to understand that food fraud is not the same as food safety, a leading specialist in the area has warned.

Food fraud exists and is concentrated on value-added products, but efforts to tackle it should focus on vulnerabilities in the food supply chain, not on quantifying it, according to Dr John Spink of Michigan State University (MSU).

Companies need to understand food safety is not the same as food fraud, the director of the MSU Food Fraud Initiative insisted during a visit to Ireland where he delivered the inaugural Musgrave guest lecture on food authenticity in UCC.

Testing is all very well “but it doesn’t prevent anything”, warned Dr Spink, a global specialist on policy and strategy when it comes to food fraud prevention.

In short, food fraud was a separate science requiring a preventative approach in much the same way the techniques of crime prevention were deployed, he said. Once the underlying fraud opportunity was understood, effective countermeasures could be employed. “These actions must consider the response from the fraudsters in a chess match of wits.”

He said he was acutely aware of the importance of “Brand Ireland” and the international significance of its quality, value-added products. Add in the landscape and green grass, and the product mix was compelling but so too was the ability of food fraud to undermine the brand, he noted.

Ireland was lucky in having a small range of big commodity brands in dairy, cheese, meat and spirits which are backed by the science-based Food Safety Authority of Ireland.

It had become a global leader in counteracting what he called “early food scares”, as shown in how quickly it reacted to the 2013 horse meat scandal that hit Europe. However, he pointed out that it had happened and served to illustrate inherent risks in the food chain. The key in tackling food fraud was identifying what was coming next and and then investing in prevention.

It was during his time working in corporate America that food fraud kept coming up and he concluded that nobody was addressing the root cause. He said it was essential to come up with the right strategy to deal with the problem. So, if it was the case of a microbe causing a problem, you go to microbiology for a solution, in the case of humans committing food fraud “you go to social science and criminology”.

It also means companies have to put in place the food fraud equivalent of CCTV, “so the bad guys see that, and don’t go down that street”.

The technology needed to do that has got much better but the proceeds of crime were so substantial, there were always new people eyeing opportunities. Fortunately, that technology was “more portable, faster and cheaper”. Likewise the ability to species test – to answer questions such as: is this meat sample wild boar?

“It’s not like a crackhead and the need to get a fix tonight,” said Dr Spink. Criminals usually have a lot invested in their enterprise and plot carefully, so food fraud problems constantly change. Big brands may have huge opportunities but they are also a huge opportunity for criminals, which meant potentially huge losses – not forgetting a broader hit for retailers and the undermining of consumer confidence.

He doesn’t lead front-line food fraud investigations: “I prefer to stay away from the business end of a gun.” But he works with a lot of people who kick down doors, and if zebra meat is detected on the market in South Africa, he wants to know how did that occur and whether the circumstances were similar to the 2013 horse meat scandal. He also supplies a global perspective to the investigations he is involved with.

On the frequence and prevalence of food fraud , he said that there may be relatively few incidents and theses could be notoriously difficult to confirm, but he preferred to concentrate on vulnerabilities within the food chain to prevent such occurrences. “The most efficient focus should be on how and why a crime opportunity exists – which is more than just catching bad guys or bad product.”

The response of food safety agencies and companies was improving, Dr Spink said, but often there was an inadequate structure despite the fact that there may be a lot of regulations. Statutory powers may vary between jurisdictions. “Sometimes organised crime is very organised, such as in places where the state is very weak.”

The moment you take your eyes off a part of the food chain, “that is the one that becomes vulnerable”.

Dr Spink said the problem could be divided into two areas. Domestically, it was usually “a public health/consumer confidence issue” and could be addressed by better controls. With exports, it was more of financial risk because that is where there is most valued added, such as with a bulk blended food product. “Once you cross a border the opportunity for fraud arises . . . Companies’ priority should be where you have highest value.”

While food supply chain stakeholders were well accustomed to food safety and quality risks arising from unintentional acts, they were becoming more familiar with management approaches to deal with vulnerabilities “due to intentional economically-motivated acts”. Greater information sharing and collaboration among stakeholders at all levels of the supply chain was, however, also needed, he said.

He is an advocate of enterprise risk management; an all-encompassing concept implemented in industry that is “effective in evaluating unknown or unknowable probabilistic risks such as product fraud”.

Equally, the study of underlying drivers of fraud opportunity leads to more effective and efficient selection of countermeasures. “Deterrence is achieved through a systems approach and not a single, magic panacea.”

UCC, Musgrave, Teagasc and MSU have collaborating on policies and practices to protect food supply chain integrity, especially under Brand Ireland. This includes food exported abroad under Origin Green and other marketing banners, as well as food produced in Ireland that is consumed domestically.

The MSU food fraud resource is available at foodfraud.msu.edu.