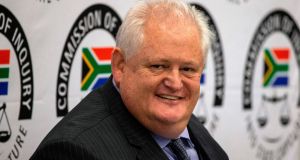 Angelo Agrizzi, former COO of Bosasa, testifies at the commission of inquiry in January in Johannesburg. Photograph: by Wikus de Wet/AFP/Getty

A multimillion-euro facilities management company that has been implicated in a massive public sector corruption scandal in South Africa has gone into voluntary liquidation because local banks have closed all its accounts.

On Monday, African Global Operations, which traded under the name Bosasa, said in a statement released by its chairman Joe Gumede that “extensive reputational damage” had prompted two local banks to act against the group.

While the company had tried to open new bank accounts in South Africa and abroad, Mr Gumede said it had been unsuccessful, and going forward the company could not trade without a bank account to pay creditors.

“The extensive reputational damage in the past few months, occasioned by negative media reports, has resulted in financial institutions’ determination that the African Global group poses a reputational risk for them as clients,” the statement said.

“The decisions made by the financial institutions are not based on the African Global Group’s liquidity status, financial stability, operational performance or growth forecasts,” the group explained, before adding: “On the contrary, the group is both factually and commercially solvent. Tragically, the group will be unable to trade without a bank account”.

According to local media reports, First National Bank and Absa are the financial institutions that decided to sever ties with the controversial company, which had its reputation torn to shreds by a whistleblower in January at a public sector corruption inquiry.

Bosasa’s former chief operating officer Angelo Agrizzi told the commission of inquiry into state capture, corruption and fraud in the public sector that every public sector tender the company was awarded over the 19 years he worked at the firm had involved bribery and fraud.

In addition, Mr Agrizzi drew Falcon Oil and Gas into the scandal when he claimed the Dublin-based resources company had offered it facilities contracts in return for help to get restrictive fracking legislation in South Africa amended.

Falcon chief executive Philip O’Quigley has denied this allegation to The Irish Times.

African Global Operations described the effects of the decision to liquidate on its 4,500 employees as “devastating” and “unparalleled,” but made no direct mention of the allegations of corruption that have been levelled against it in its statement.