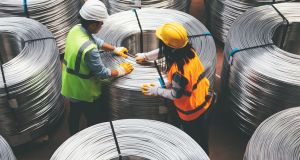 According to AIB’s PMI, stocks have risen in 11 of the past 12 months as the manufacturing sector attempts to mitigate potential supply disruption from Brexit. Photograph: iStock

Brexit-related stockpiling caused the manufacturing sector to increase its holdings of pre-production inventories at the fastest rate in almost 21 years.

According to AIB’s purchasing managers’ index (PMI), stocks have risen in 11 of the past 12 months as the sector attempts to mitigate potential supply disruption from Brexit.

The record accumulation of pre-production inventories was supported by the fastest rise in purchasing activity in more than 19 years.

Additionally, post-production inventories increased for the third month in a row in February with a number of those surveyed indicating they were building stocks to guard against any potential Brexit delays.

“Uncertainty about Brexit, though, saw business optimism slip to its lowest level in 18 months. However, it still remains at a high level,” AIB chief economist Oliver Mangan said.

The seasonally-adjusted PMI, compiled by IHS Markit, rose to 54 in February, up from 52.6 at the start of 2019. The indicator is designed to provide a single-figure measure of the health of the Irish manufacturing industry and shows that business conditions have now improved for 69 consecutive months.

Optimism among managers relating to future output was sustained in February, with just over 49 per cent anticipating higher production in a year’s time. Expectations of greater customer demand and growth of new export business were cited as reasons to be confidence although increased Brexit uncertainty was reported as a factor that weighed on optimism.

As a result, overall sentiment fell to the lowest level in a year and a half.