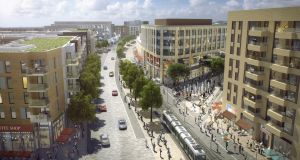 An artists impression of the proposed town centre at Cherrywood in Dublin.

US private equity giant Lone Star has emerged as the leading bidder for 73 acres of development land that investment firms Hines and King Street Capital are selling in Cherrywood in south Dublin that would be capable of delivering 2,600 homes.

It equates to almost 18 per cent of the 412-acre site that the two firms acquired in 2014 for €270 million, after the National Asset Management Agency and a group of banks appointed receivers to the most valuable plot of land in south Dublin. It is located at the interchange of the M50 motorway and N11 and belonged to builder Liam Carroll before his businesses collapsed in the property crash.

The Irish Times reported last September that Texas-based Hines and New York’s King Street had hired Savills in Ireland to market the 73 acres. Sources have said that Lone Star lodged the most competitive bid for the asset, but declined to give financial details.

Cherrywood is a government-designated strategic development zone (SDZ) project to build a new town comprising more than 7,700 new homes, six schools, shops, cafes, parks and leisure facilities, serviced by the Luas green line. It is eventually expected to have a population of 25,000 people, according to its promoters.

Last year, Hines, in partnership with Dún Laoghaire-Rathdown County Council, completed the construction of the first phase of the project, comprising three new parks, sports facilities and 5.4km of roadways.

The sale of the 73 acres is part of wider strategy of Hines and King Street to recycle cash committed to the project as opportunities arise. In early 2016, the partners sold on two lots in Cherrywood to Cairn Homes, while in January 2018 they sold eight office blocks at the business park on the site to San Francisco-based Spear Street Capital for €145 million.

Lone Star had planned last year to roll a number of Dublin development projects into a new publicly-quoted company, called DRes, which was being set up by Durkan Residential’s managing director, Patrick Durkan. However, it decided in early November to postpone the €300 million-plus initial public offering (IPO) after equity markets turned volatile.

The Cherrywood land may provide DRes with an additional asset ahead of a possible future IPO.

Meanwhile, developer Johnny Ronan was named as the preferred bidder last month for an adjoining 13.1-acre site owned by Dún Laoghaire Rathdown County Council, which is earmarked for office and residential development. Hines was also in the running for the site.

The county council, through its DLR Properties unit, has elected to receive one of the buildings to be constructed as payment for the site, rather than receiving cash.