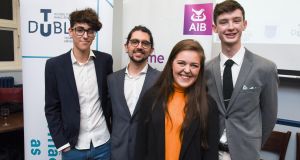 Starting out from a college project, four product-design students from Technological College Dublin have created a device aimed at reducing antimicrobial resistance (AMR) in humans, while also saving money for farmers and animal owners.

“We actually formed as part of a college assignment for one of the modules called ‘enterprise development’ and so that’s kind of where the initial idea for the Tástái parasite testing came from. We just worked really well as a team and we realised, actually, there was a real gap in the market for the product,” says Sean Smith, chief executive of Micron Agritech.

It was through a conversation with a UCD veterinary student that the initial interest in solving the testing issue arose. Micron’s CTO, Jose Lopez, was looking for ideas for their project when the vet student suggested the testing process could do with speeding up.

“She told him that although she knew that blind dosing her horse isn’t okay for the environment and she knew how to perform the test on the horse she didn’t because it takes too long, she just dosed the animal constantly with medication,” explains Daniel Izquierdo. “She said if we could develop a product that lets her do this easier then it would be revolutionary for herself and everyone. From there we decided to take the challenge on and developed Tástái.”

Prevention is the current method used for dealing with parasites in animals. Owners routinely blind dose their animals and testing is rarely carried out, it’s time consuming, as samples have to be sent to the labs.

“Right now it’s the labs would really be the closest thing that exists to what we are trying to do,” says Izquierdo, “but they don’t really carry out tests that often. From our research it’s 27 per cent of farmers are testing through the labs and it’s a long and burdensome process.”

The Tástái device will allow animal owners to test onsite and dose the animals accordingly. This in turn will eliminate any unnecessary medication entering the animal’s system and of course will work out cheaper for the farmers or animal owners in the long run.

“The actual analysis device itself is an electronic device and there are some consumables within the kit,” explains Smith. “You take a faecal sample from the animal and there’s a solution you add to dilute it; any parasites that are present will rise to the top and get filtered through, that’s what you put in the device for analysis. There are some consumables that would have to be replaced but the device itself is rechargeable.

“We wanted it to be as simple as possible. Essentially the product itself does the analysis – you just get a text on your phone with the results, it takes a matter of minutes. There is no website, apps or download required – you just register your phone number.

“We’ve been out on a couple of dairy farms to get an idea of how samples can be collected. When the herd is coming through the shed to be milked there’ll be enough fresh samples on the ground to just take or if you want to target one specific animal you can just bring them into the crush and get it that way when the animal is isolated.”

The team, which also includes chief design officer Tara McElligott, won TU Dublin’s Bolton Trust student enterprise competition, opening a lot of doors for them and in particular the one that leads to Hothouse, TU Dublin’s knowledge transfer and incubation centre.

“We talked to Hothouse, which is the commercialisation department in TU Dublin and they said we’ll back you for a patent and forming the company, if you want to really make a go of it. We officially became a company in May this year.

“The university has been backing us from the very start, they’ve filed a patent for us, they’ve incorporated our company and they actually have done all of our marketing materials. Since then, in terms of financials, up until now we’ve been running off winning competitions. That’s what we’ve been using to raise money – we’ve maintained all equity by doing that and our next step would be going through a kind of private investment,” says Izquierdo.

“We’ve been approached by investors and begun talks. We are actively looking and open to anyone approaching us.

“We are also using research from the School of Computer Science in our university – one of the PhD students there is helping us at the moment. We do plan on hiring someone or even potentially bringing them on as a partner.”

They have a full year of study left and an agritch start-up that is starting to make a name for itself around the agricultural shows, including this week’s National Ploughing Championships.

“Obviously it’s challenging at times. I’ve probably less of a social life than a lot of 20 year olds but with the way I see it is it’s worth it in the long run because you can’t buy that experience,” says Smith.

“The other really cool thing about it is it’s not just that it’s a life-changing experience for us but the company itself; what we are doing, it actually has a huge impact globally. To be able to say, at 20 years old, we’ve made a global impact when the company launches, that’s a big driver for us. We really do want to make that kind of difference,” Izquierdo adds.