From ways to tackle climate change through to helpful peptides, home shopping delivery services to a new shower caddy, this year’s finalists show Irish innovators are hard at work 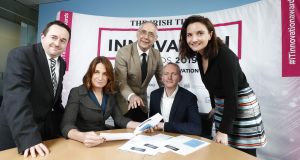 The 15 finalists in this year’s Irish Times Innovation Awards have been selected. Across five categories, the finalists were chosen from more than 100 applications, which were whittled down to fewer than 80 high-quality, first-round entries.

This year’s finalists will be offered presentation skills training before pitching their innovations to a final group of judges chaired by investor and Irish Times columnist Chris Horn later this month. The winners will then be announced at a ceremony at the RDS in Dublin on Tuesday, November 5th.

FoodMarble has developed a connected breath analysis device and app to help find the foods most compatible with each person’s specific digestive system. Called AIRE, users log what they eat on a detailed food composition database. They then use the AIRE pocket-sized affordable device to measure hydrogen levels on the breath, which identifies foods that aren’t absorbed fully. This lets users identify foods that may likely cause digestive discomfort.

Nuritas has garnered international success and backing already as it endeavours to use artificial intelligence (AI) to discover novel food-derived peptides, which have pronounced health and wellness benefits. These peptides are then used in a preventative capacity by incorporating them into everyday foods and personal care products to prevent the onset or progression of conditions such as diabetes, cardiac problems and ageing. They can also be developed into therapeutic drugs that can treat chronic diseases. With the launch of PeptAIde, Nuritas says it has used AI to move from initial partnership discussions to the commercial launch of a validated healthcare product in under two years. PeptAIde is comprised of a unique peptide network unlocked from rice protein. It was developed to alleviate inflammation, the body’s response to injury. Research demonstrates that the consumption of PeptAIde leads to anti-inflammatory responses.

Atlantic Therapeutics of Galway has created a non-invasive, long-lasting solution to bladder weakness. Featuring conductive material printed onto a high compression garment, similar in style and feel to a pair of cycling shorts, it has developed Innovo, a wearable muscle stimulation device that delivers 180 pelvic floor contractions in every 30-minute session – safely and effortlessly.

Buymie is an online shopping delivery service, offering consumers a retail service similar to what Deliveroo operates for the restaurant trade. The Buymie format involves customers using the app to order grocery and household items from large retailers such as Lidl and Tesco, and have their items delivered in as little as one hour by their very own personal Buymie shopper. For retailers, it offers a pre-built digital platform and the opportunity to plug into the on-demand grocery delivery market using a shared logistics network, thereby removing the need for large, up-front investment.

Auranta is a spin-out from NovaUCD which has developed an innovative range of sustainable complementary animal feed products for calves, poultry and pigs. Its products offer enhanced performance and reduces antibiotic usage. With impending regulations set to drastically curb the use of antibiotics in farm animals, the range is timely and could help shape the future of agriculture.

Dun Laoghaire-based TechWorks Marine has developed the CoastEye Mini-Buoy following the Environmental Protection Agency (EPA) identifying its need for small, portable, multi-sensor buoy platforms which it could easily deploy from a small boat, for 1-2 months at a time in specific “hotspot” locations. Before the buoy’s development, the EPA had to send out teams of trained staff to carry out field sampling. This is a very onerous process in terms of staff and the number of sites that can be covered.

Gaseous emissions from manure are a major source of greenhouse gases (GHGs), accounting for 16 per cent of agricultural emissions in the EU, acting as a driver of climate change. NUI Galway-based Glasport Bio has developed an innovative product, GasAbate N+, to solve this problem. The product, added periodically to stored slurry, inhibits the bacterial production of gases. In doing so it ‘locks in’ the nutritional value of stored manures. Treated manure therefore becomes more valuable as a fertiliser and feedstock.

Carbon offsetting was big news once upon a time, and indeed seemed to be something of a panacea for all our climate change ills. However, it lost its momentum as issues arose over the money trail and whether it was actually encouraging western users to cut their emissions or simply ignore them. Vita, an Irish-based non-profit organisation, seems to have a potential solution to the carbon credit conundrum. Its approach is to provide an investment programme that supports rural communities in developing areas with high-impact, low-carbon energy and water solutions. The aim is to reduce deforestation and emissions by providing support to these communities. Vita fully controls the entire process.

Limerick start-up Electricity Exchange has developed a fast-acting control and metering system to maximise the revenues which can be earned from EirGrid’s DS3 System Services programme. This product is designed to meter, detect and respond to frequency deviations on the national grid at speeds nearly three times faster than the fastest rate of response required by EirGrid. For its customers, the system maximises the reward for being on standby to resolve frequency deviations on the grid.

Mayo-based Showergem is a shower accessory company, which has developed a shower caddy which can be attached to tiles using a transparent glue designed for wet environments. The company says its product, which doesn’t require suction cups or drilling, is rustproof. It was born out of frustration from using a traditional metal caddy with suction cups that would rust and rarely work. It recently got the backing of three investors – Sara Davies, Touker Sulyman and Tej Lalvani – during an appearance on the UK BBC show, Dragons’ Den.

Based in Tuam, Co Galway, Chameleon develops, manufactures and exports paint-mixing machines for the paint and coatings industry worldwide. Its machines are sold to large paint companies who in turn deploy the machines in paint shops to allow customers to choose any paint colour. Under a new innovative project the company has developed a machine that has dramatically reduced the downtime for repairs thanks to a self-maintenance system. It also guides the operators through various best-practice steps to avoid mistakes or problems.

Finally another Mayo company makes the final three due to its innovative solar-powered compacting litter bin. The BriteBin from PEL Waste Reduction Equipment incorporates an on-board solar powered motorised compaction system, which increases the litter-holding capacity by up to 10 times the volume of a standard street bin. It also offers real-time monitoring and its alert capability lets the local operators focus their litter collection resources on only those bins which require servicing.

IT & Fintech - sponsored by KPMG

With the advent of new disrupters such as Revolut in the retail banking market, fintech startup Cambrist offers a turnkey solution enabling established banking players to offer innovative foreign exchange products and services to customers. This closes the functionality and pricing gap enjoyed by new entrants in the sector. Bank infrastructure is based on legacy technology and restricts traditional providers from responding to these new competitive threats. Cambrist’s technology and operating services combine cloud-based payments technology, analytics and business process innovations to transform the internal operating environment and enable traditional banks to build innovative products and services that compete directly with new entrants.

Based at Dogpatch Labs in Dublin, FarmHedge has built a technology platform that enables fast and personalised communication across the agriculture supply chain. Transactions are initiated either on the supply side or demand side and create distinct economic benefits for farmers and the companies they work with.

CyberPrism is an online solution that incorporates AI with business and cyber intelligence feeds in order to assess the cyber security, risk and privacy management programme of an organisation. It essentially produces a “cyber risk rating” score, similar to a “credit rating score” and provides evidence and assurance that an organisation is “safe” to deal with in relation to cyber security and privacy issues.