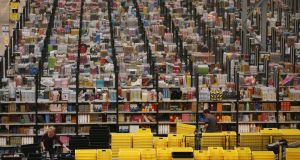 There are just over 100 shopping days left until Christmas.

Ireland has consistently had a high proportion of retail spend online. Last year, an Ipsos analysis on behalf of PayPal noted that Irish consumers are more likely than those in other countries to shop from international websites, with just 16 per cent of online purchasing being domestic.

In July, market research by IBISWorld forecast that Irish ecommerce sales would rise 12.9 per cent to €2.2 billion this year. Amazon is the largest single player in the Irish online market, and was estimated by IBISWorld to have 5.6 per cent market share.

But for all of us, shopping for Christmas and shopping in general will almost certainly radically change in just 50 days time.

A no-deal Brexit appears a near-certainty. The impact on jobs and the day-to-day lives of our communities in and around the Border would likely have consequences for decades to come, albeit in the immediate short term there would be little change. But the impact of a no-deal exit would definitely start immediately on the Friday morning of November 1st at An Post’s parcel sorting offices, for whom Amazon is a key customer.

An Post handles about 14 million parcels from the UK to the Republic per year, and about 10 million from non-EU countries into the State. From November 1st, all of these UK parcels would have to be treated as originating from outside of the EU. Non-EU parcels require additional checks for paperwork and for tariffs and duties owed. Sterling may continue to weaken against the euro, but taxes and duties may do more than balance the exchange rate gain.

Furthermore, many items are prohibited under national and/or EU regulation. Many medicines, both human and veterinary, are strictly regulated. White goods, food, chemicals, children’s toys, and many other products must be adequately labelled and safe to use. Products ordered online from outside of the EU naturally require more time to inspect, certify and tax. Shipment delays from the UK may become much longer than the current just day or two.

The EU Consumer Rights Directive grants consumers a 14 day “cooling-off” period during which goods may be returned to a vendor. Many online purchases, particularly for clothing and fashion, have high return rates as consumers order online items on trial, with the full intent of returning many of them. The Competition and Consumer Protection Commission (CCPC) and the Minister for Business, Enterprise, and Innovation Heather Humphreys warned at the launch of a public awareness campaign earlier this week, that UK retailers may no longer honour this Directive from November 1st.

Of course, any reduction in UK to Irish online retailing is nevertheless unlikely to overly concern Amazon. It had $232 billion (€210.6 billion) revenues worldwide in 2018, about as much as the combined revenues of the next three largest internet players (including Google).

However, Amazon is now facing increasing regulatory scrutiny. The EU’s Competition Commissioner Margrethe Vestager has launched an antitrust inquiry over whether Amazon unfairly exploits sales data collected from third party vendors who use its platform.

Meanwhile, the US federal trade commission and department of justice have both started their own antitrust enquiries into Amazon’s business practices, including the operation of the official Apple store on Amazon.

The Wall Street Journal has recently reported that a number of US state attorney generals are also considering a joint antitrust investigation.

In a partial response Jeff Bezos, the Amazon CEO, has recently disclosed in a letter to shareholders the dependency which Amazon has on third party sellers, and how beneficial Amazon has become as a sales channel to those small and medium-sized enterprises.

Despite this regulatory scrutiny on potential antitrust and monopoly behaviour, it is interesting to contemplate the “big data” which Amazon accumulates every day.

Amazon has historical and current data worldwide on purchasing behaviours, domestic and international supply chains, trade patterns, and competitive information on innumerable large and small vendors and their products worldwide.

Conceivably, Amazon knows more about the current situation of individual economies and global trade, than most national offices of government statistics and forecasting.

The insights and intelligence which doubtlessly can be gleaned from the worldwide trawl of such up-to-the-minute, commercial and economic data, which can then be processed at scale using data science and machine learning, potentially gives incredible economic and financial power.

Many governments, but most of all international equities and debt markets, futures and derivatives exchanges, would all consider such information of extreme strategic value.

I speculate, but the opportunity to trade the international financial markets by exploiting this information harvested entirely legally, may become considerably larger than the online retailing market which Amazon already dominates.

In the meantime, Amazon’s opportunity to profit from any data they have on us is unlikely to unravel any Christmas present delivery problems we encounter due to Brexit. Then again, Brexit could prove a useful target to blame if you forget to shop for someone.