With GET’s new mid-air recharging area, drones can fly non-stop to their destination 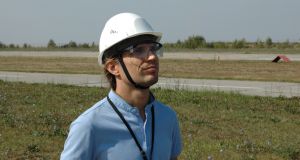 “You may think about it as the gas station for drones. With cars, when you need more fuel you just charge at the station. Same here with the drone: you need more power you just go to the charging area.”

Commercial drone flight time is currently limited to around 20-30 minutes. But that is due to drastically improve thanks to Russian brothers Leonid and Sergey Plekhanov.

“We were always thinking about something new and interesting in electricity and wireless power or something like that,” says Leonid Plekhanov, chief executive of Global Energy Transmission (GET). “Finally, at the end of the day, we decided to try to do something really new, created on our own, and this is how we started our own company. When we started in 2014/15 we didn’t have an exact vision of the final product, of course, and [for the] final application we just started around wireless power – that was our core idea from the very beginning. Then, of course, from one attempt to another, from one prototype to another, we gradually developed our final product, which . . . still we always do enhancements and modifications, it’s a never-ending product.”

GET, which is headquartered in Portland in the US but has its engineering department in Moscow, has developed a recharging station enabling continuous drone flight. It’s game-changing technology for those who intend drones to be the future of their companies’ infrastructure.

“Our product is really about quick mid-flight charging for commercial grade drones, and there are, I would say, two steps here: short term and long term. Short term, I think this product is a great addition for all kinds of monitoring activities where drones are involved, such as monitoring of power lines, pipelines, energy infrastructure, power plants, security for those power plants and airports. Oil field inspection, power plant inspection and gas leakage detection using drones with infrared camera/thermal cameras, all those kind of applications can really be optimised now and scaled up using our product.

“In the longer time-frame our solution, I believe, will be an essential component of the technological ecosystem for part of parcel drone delivery, because without mid-flight charging you can only do part of the area that you’d like to. You can charge mid-flight, ad hoc at any time, and that makes a big difference for sure.”

The hover area for drone recharging over the station is typically between three and 10 metres. The fact that the solution is wireless makes the recharge an all-weather, day or night activity and eliminates any interference from outside parties. There is no requirement of any human interaction, which will cut down staffing in remote locations.

Basically, we just need any kind of power source; whatever you have, we don’t care

“You don’t need to do anything because we believe it’s important for a flying vehicle to stay in its natural environment, which is the air, for a number of reasons. One of them is, it gives you full control over the product because when your drone has landed in a remote area, you have no idea what is happening to it and who has access to it and the equipment or data on board. As long as it stays in the air you control the whole situation. It’s also an all-weather transmission because plug-in [systems] always has an issue in terms of rain, snow, dust, especially in the case of high-powered charging. We don’t care about rain, dust or even snow – it just works away, so a perfect system for all-weather application usage and also out-of-hours.”

As recharging occurs inside the “power bubble”, a drone can be recharged to full power within six minutes which, in many cases, is quicker than the time it takes to safely land a drone and take off again.

“We can send really a lot of power – we have batteries that are capable to accept that high current, that’s really important. Basically, we just need any kind of power source; whatever you have, we don’t care, we can use any power source, we just need enough power for our charge mid-air product. We have a 12kW output 80 per cent efficiency for a plug-in to a battery, so you probably need up to 15kW at a power source to operate at full power level.”

From the power management generator the power is transmitted via an antenna, creating a type of magnetic field the drone must fly into.

“The drone has on-board receiving, so when the drone gets inside the area of the magnetic field generated within the critical to land area, it starts to charge. You don’t need to wait: as soon as it gets inside, it starts charging in the air right away.

“During the charging station [operation], at full power, we do not expect people staying inside the recharging area, because it is maybe a bit dangerous in terms of [magnetic] field. But in terms of ecological safety concerns for humans, if you stay outside of the charging area, then we are actually below World Health Organisation standard for everyday exposure to magnetic and electric field, so you can live and sleep there without any issues, its absolutely safe.”

The basic physics of the technology has been around for centuries. GET uses resonance coupling circuits which it has been able to adapt it.

“Usually it was used for high frequency, for tiny filters in [the] radio industry and the like and we actually really developed it, I would say, to a new level of engineering thanks to modern components which maybe appeared during the last 10 years, because 10 years ago we would not be able to create a system.

GET has launched its wireless drone-charging technology and is waiting to obtain a commercial electricity licence in the US to sell the system commercially. The company was granted a temporary licence by the Federal Communications Commission for the launch in December to run trials.